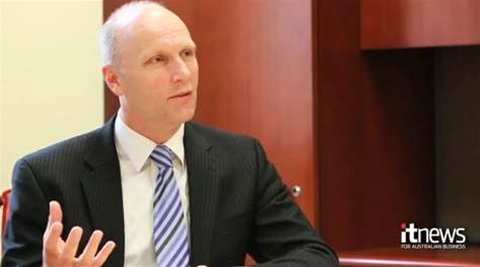 The future model for IT infrastructure outsourcing.

The Commonwealth Bank has stood up a hypervisor-agnostic cloud computing platform during proof of concept trials, a platform the bank expects will enable it to shift workloads between outsourced IT service providers in the future.

In an extensive interview with iTnews, Commonwealth Bank executive general manager of service support Nick Holdsworth explained that the sheer scale of the CBA's cloud computing investment - which covers multiple data centres and regions - will help the bank extract more value from outsourced suppliers and promote the growth of a domestic cloud computing industry.


[Part II and Part III of this video interview appear on the following page].

The bank has settled on a standard, virtualised infrastructure stack, to be deployed both in-house and mandated for private cloud providers wanting to do business with the bank.

The bank will outsource the lion's share of its IT infrastructure needs to a service provider that is prepared to offer favourable pricing to win the bulkiest block of the bank's data-crunching business.

But unlike past outsourcing agreements, the CBA will ask that these services be delivered on the bank's mandated 'cloud' architecture and under a contract that allows the CBA to rapidly shift to another provider if competitors offer better value.

If multiple service providers build out a cloud on the same infrastructure stack, the CBA will achieve its dream of service "contestability."

Holdsworth noted that organisations the size of the Commonwealth Bank have the scale to acquire IT infrastructure in bulk for a lower cost than if purchased from today's cloud providers on a pay-as-you-go basis.

But if cloud computing can make services more 'portable', the CBA can negotiate with a dedicated provider (kept honest by the ease with which the bank can shift the bulk of its business elsewhere) and also manage peaks in demand for computing resources by "bursting" onto additional capacity on a pay-as-you-go basis.

"Ultimately what you'd want to do is have a dedicated scale that you can optimise use of, and then burst out of that for peaks," Holdsworth explained.

The bank is "trying to graph the point at which you have a pretty steady utilisation - as high as possible - [whilst able to] burst out of that into other environments - where you may be paying a high unit cost, but your overall cost is reduced because you're not paying for those services 24x7.

Holdsworth said the bank is "ready to start looking at how to scale out" the infrastructure it has already deployed and what partners will provide these resources as a service.

The CBA has developed standard software environments - applications housed in what Holdsworth describes as an enterprise 'app store' - that can be loaded into the bank's cloud infrastructure stack at the click of a mouse.

The bank will also use its cloud platform to manage the peaks and troughs of application development.

"A developer may want to start cutting some code - today they'd log onto a development system which may be sitting around 24 hours a day waiting for developers to log onto it," Holdsworth said.

"We may be consuming all or some of that capacity at any time and in fact at times we may need more of that capacity. So today, that's quite a static environment and one that has both waste but also issues around how we scale that up if we require.

"What we're talking about doing is being able to take that .NET development stack - the software or platform component - and actually pick that up and load it into a scalable hosting environment, which would enable it to be paid for only as long as it was consumed, and would enable it to scale up and down on the basis that demand dictates."

Read on for how the CBA will use the cloud as a bargaining chip when re-negotiating outsourcing deals...