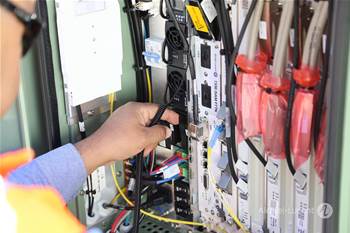 NBN Co is set to announce a second expansion of its fibre-to-the-curb (FTTC) rollout within weeks, marking its rapid propulsion as a replacement for fibre-to-the-node (FTTN) in the network.

CEO Bill Morrow told a senate estimates hearing last night that the network builder’s focus on FTTC was in part about increasing the proportion of the NBN that would be capable of speeds in excess of 100Mbps in future.

Reiterating comments made to an American Chamber of Commerce (AMCHAM) forum earlier this week, Morrow made it clear that NBN Co wanted to equip a greater portion of the network with the capability to support gigabit speeds in future, even if he did not see demand for them now.

“We’re going to be making some announcements about FTTC soon … [in which] we’re going to move a number of FTTN homes onto FTTC,” Morrow said.

“This is part of our program of how we can reduce the costs of pushing fibre down closer to your house to where you can have those gigabit-per-second capabilities, or maybe you only need 500Mbps or 250Mbps.

“We want you to have those [speeds] and we’re constantly looking at ways to roll the technology out faster, reduce the costs and keep to the peak funding envelope that we have to operate within.”

NBN Co initially said the FTTC footprint would cover 700,000 premises. These were to be a mix of premises with degraded Optus HFC connections, as well as homes and businesses that had initially been promised FTTN.

The FTTC footprint was expanded in April to cover an additional 300,000 premises, which iTnews exclusively revealed came at the further expense of planned FTTN areas.

NBN Co has a $500 million pot that it is partially allocating towards this task.

The network builder remained tight-lipped on the exact nature of the further forthcoming expansion of the FTTC footprint, which also comes at the expense of FTTN in the rollout.

Details of the impending announcement appear to be tied to a revision of the company’s corporate plan, which Morrow indicated was being worked on.

Based on previous expectations, NBN Co may only be a matter of months away from beginning work on the first FTTC areas.

One of the intriguing aspects of NBN Co’s estimates commentary on FTTC is its positioning as a way to give more premises in the rollout a better chance of supporting gigabit services in future.

Morrow made much the same point during a speech to AMCHAM in Melbourne earlier this week, although it was largely overshadowed by comments that “very few Australians have a use for gigabit speeds today” and that NBN Co’s pricing was not a barrier to take-up of higher speed plans.

“Installing gigabit speeds today for everybody would be a significant investment with a questionable rate of return,” he told AMCHAM.

“Ultimately, this why we are building the network Australia needs today and ensuring the technologies we are deploying each have a very clear upgrade path into the future.”

However, Morrow faced tough questions at estimates on just how much of the network has the capability – or future potential – to cater to gigabit services.

He said “roughly half” of the NBN network would be capable of gigabit services – that is, users that receive FTTP, HFC or FTTC.

“FTTN by itself, with the copper loop lengths that we are building with, will not give you gigabit speeds,” he said, noting about 4.2 million homes have or are in line to get FTTN.

“Then you have to add the eight percent [of the population] on fixed wireless and satellite, so then you’re talking around 40 percent that won’t be able to get to 1Gbps [using current technology].”

Morrow is however banking on both FTTN and fixed wireless having potential upgrade paths to support gigabit services.

Assuming a viable business case to do so emerges – Morrow notes it presently isn’t there – the majority of the NBN network could be capable of running at speeds in excess of 100/40Mbps.

“When we can upgrade [already-cabled FTTN areas] to FTTC and we use G.FAST capability with the little DPU that we put into the pit in front of your home, then that’ll give you up to 1Gbps speed,” Morrow said.

“[We may also be able to] enhance fixed wireless to a gigabit. There’s promise with 5G and some of the enhanced 4G+ capability that we might get there.”

That would leave only the company’s satellite footprint with much slower speeds. “Satellite’s not going to deliver [gigabit speeds] anytime in our tenure here,” Morrow said.

For those FTTN users that are too impatient to wait for a mass business case to emerge, Morrow is hoping to sell them on 'technology choice', the user-pays upgrade program run by NBN Co.

“If these four million FTTN homes want gigabit per second speeds they have the choice individually to go through our technology choice and pay for it [themselves],” Morrow said.

“There’s been 54 submissions that are in process of being upgraded with them paying the incremental amount to be able to push that fibre all the way to their homes where they can go above 25Mbps.”

Morrow said the cost to upgrade from FTTN varied “depending on how close you are to the node”. He said the current quotations ranged from “sub-$1000 to tens of thousands of dollars”.

While many requested an upgrade from FTTN to FTTP, Morrow said NBN Co is now pushing for upgrades to FTTC instead.

“That eliminates a $1000-1100 average cost that goes from your footpath up to your house.”

The highest ever quote for a technology choice upgrade was $157,000, according to NBN executives. However, this was for an upgrade from fixed wireless to FTTP, accounting for the higher amount.