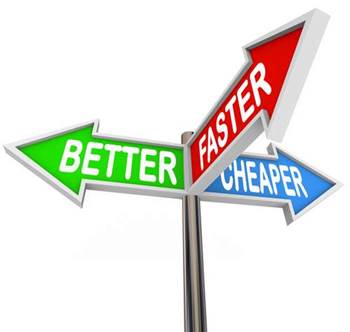 NBN Co has revealed it won’t offer 250 Mbps and up to gigabit speeds to its entire HFC footprint, constraining availability of the new high-speed plans to a subset of HFC users for at least a year.

The limitations were disclosed as the network builder finally launched the 100/20 Mbps, 250/25 Mbps and up to 1000/50 Mbps plans it came up with via a wholesale price review late last year.

The limits on the HFC network’s ability to support the highest speed services are likely to be a source of some embarrassment for the Australian government.

Affordable services with up to gigabit speeds have been touted for the fibre-to-the-premises (FTTP) and HFC footprints since being announced last year.

However, it is now clear that only the FTTP footprint has the capacity to support these speeds from the outset.

Additionally, it is unclear what proportion of the HFC network will be able to even support 250 Mbps speeds, let alone the “up to” gigabit speeds which - on HFC - are profiled at 750/50 Mbps with the capability for short “bursts” beyond that.

“This will provide an opportunity for nbn and RSPs to work together to understand customer demand, usage patterns, customer satisfaction with speed performance and the future growth profile,” NBN Co said.

By contrast, both tiers will be accessible by “100 percent of the NBN FTTP footprint” from today.

"We are starting to unleash higher speed tiers on a phased basis,” NBN Co's chief customer officer for residential Brad Whitcomb said in a statement.

“Launching the three new higher wholesale speed tiers is the next step in our network evolution and we will continue to upgrade the network to offer higher speed services to more customers over time.”

Whitcomb said an interview with subscription telecommunications publication CommsDay the HFC limits were an exercise in user experience preservation, with network capacity already under strain from extra COVID-19 traffic demand.

"We don’t want to be in a situation where somebody is getting their 250, and that’s somehow compromising the experience with somebody else in that shared bandwidth pool that might be on a lower speed plan,” he said.

Aussie Broadband has already said it will launch up to gigabit speeds for $149 a month retail, while it will also offer the 250/25 Mbps service for $129 a month.

Over-provisioning to be extended

Another outcome of NBN Co's pricing review last year was a decision to over-provision the downlink on the new 100/20 Mbps and 250/25 Mbps products.

The reason for this is to offset the amount of bandwidth used up in carrying data packets and ensuring they reach their intended destination.

This should mean customers can reach theoretical 100 Mbps and 250 Mbps topline speeds, where they are currently unable to.

NBN Co had been asked to extend this to all plans - not just two new ones. It has now committed to do so, bar the gigabit product.

"NBN Co is planning to overprovision most other existing wholesale fixed line speed tiers starting from between June and August 2020 (with the exception of the new Home Ultrafast speed tiers," it said.

"The provision of additional download capacity at the wholesale layer is designed to accommodate protocol overhead, which includes the code used to help ensure the correct delivery of data packets, that otherwise impact a customer’s broadband speed.

"The intention is that more customers can experience download speeds that are closer to the maximum theoretical download speed of their chosen retail speed tier, subject to factors such as the capacity of the internet retailer’s network and the efficiency and throughput of their in-home wiring, router and wi-fi equipment."