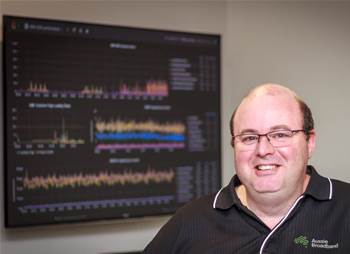 Aussie Broadband is set to launch up to gigabit speed residential NBN plans at the end of this week, priced at $149 a month.

The retail service provider (RSP) is moving into the market after NBN Co unveiled plans late last year to introduce a more affordable “up to” gigabit tier with a heavily asymmetric 1000/50 Mbps profile.

With the new wholesale plans set to be introduced from this Friday, Aussie Broadband said it intended to “offer 1Gbps plans as soon as NBN introduces the product”.

“The new plan will initially be released for all FTTP premises and some of the HFC network, and we anticipate the footprint will grow with time,” Aussie Broadband’s managing director Phillip Britt said in a statement.

As revealed by iTnews in March, the up to 1000/50 Mbps product has different tiering based on the access technology.

NBN Co technically defines 1000/50Mbps service as anywhere between “500 Mbps and 1000Mbps” on the downlink and 50Mbps on the uplink.

Much like existing 100Mbps services, Britt said he expects speeds on the up to gigabit plans to max out at between 80 percent and 90 percent of what is theoretically possible.

“This is a ‘best effort’ service and peak evening speeds will vary based on network demand at the time,” he said.

“We think that the plan should achieve off-peak speeds of up to 80-90 percent, depending on the technology type.”

“For the moment, we will be advising customers our peak evening speeds for our 250Mbps plans as a baseline until we have collated enough data from our own network testing,” Britt said.

iTnews has confirmed that baseline speed is 215 Mbps.

Aussie Broadband was vocal during the development of NBN Co’s up to gigabit plan about the bandwidth levels that would be required to support full gigabit speeds.

Britt said that Aussie will “strongly recommend” that customers pair a Google Nest device with their up to gigabit plan “as more basic routers may not cope” with the higher speeds the plan is capable of.

At $149 a month, the up to gigabit plan costs $20 a month less than what Aussie Broadband has previously sold a 250/25 Mbps service for.

Possibly for that reason, Britt said that “residential customers who are currently on a 250/25 plan will be automatically migrated onto the cheaper 1000/50 unlimited plan, unless they choose not to change.”