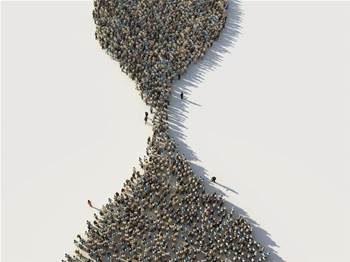 Prime Minister Scott Morrison has blamed Centrelink’s notoriously sweated legacy technology stack for the unfolding customer service and public health train wreck that has forced thousands of desperate welfare claimants to put their own health at risk by queuing up at offices.

As the nation was told of a raft of sweeping new COVID-19 social isolation restrictions that will shut everything from hairdressers to funeral caterers, Morrison told Sydney radio firebrand Alan Jones that changes could not be made to the current systems because it would make things worse.

Jones was quizzing Morrison as to why an employment termination notification made to the Tax Office couldn’t in turn trigger a notification to Centrelink to help validate eligibility for welfare benefits that have just been substantially boosted in response to the forced economic shutdown.

“Every employer knows the details of every employee and the Tax Office has those details. Why couldn't the employer notify, verify that X, Alan Jones, Scott Morrison has now been put off and is eligible for the Newstart allowance and can you automatically transfer that into his account?,” Jones demanded, painting a cheery visual image with words.

“The integration of those two systems and with the welfare system would require a complete rework and massive recoding. We need to deliver our systems through the systems that are there,” Morrison said.

“If you try and reinvent systems in the middle of a crisis, what will happen is the system will go even to worse disrepair and there will be even greater delays.”

Which is not to say the existing systems have not caused their own crisis, particularly around the lack of pipe and rapidly scalable infrastructure that has been pretty standard in banks for more than a decade.

Government services minister Stuart Robert threw himself under the Centrelink online disaster bus yesterday, saying it was “my bad” that he did not appreciate the scale of the impact the government’s measures would create.

The bad news for welfare claimants new, old and prospective is that Morrison believes the state of the Centrelink stack is such that it is better best not touched for a while under the COVID-19 emergency lest more things go wrong.

“So it can’t be done?” Jones pursued regarding his change.

“Not in these timeframes,” Morrison replied.

“That would take six months to a year to make those sort of changes, is my understanding. We need to, they’re very complicated systems, Alan, we’re dealing with payments that go to millions and millions of Australians.”

The problem at Centrelink, as iTnews has repeatedly canvassed, is it isn’t just that the systems are based on 1980’s mainframe applications slowly being replaced. It’s that the rules of the welfare system are now so convoluted and entangled even the smallest of changes take months.

“They're very complicated because there are so many rules about these payments. And the coding in the systems is so sophisticated that a simple change, what sounds simple, I understand and the way you’re explaining it, isn't on the other side of the line,” Morrison said.

“So we need to use the existing systems. That's the best way to get the payments out as quickly as possible.

“Our problem at the moment is building up the capacity of the system to take more applications.”

On that last point, millions of Australians will agree. It’s just the numbers that jar.

“We’re normally at around 6000, we had to move to 55,000, then we went to 150,000. Now we're seeking to take that even higher to cope with the demand, so extraordinary times,” Morrison said of user numbers hitting myGov.

In the Commonwealth Bank of Australia’s last results, the institution cited unique customer logins for December 2019 at 5.9 million.

In rough terms, that translates to just under 200,000 users a day hitting the CBA front end, and that’s just for a single log-in. Many customers would log-in a number of times a day.

There would also be peaks and troughs that put concurrent numbers well above the influx that choked myGov.

The question of why most retail banking institutions can take such traffic in their stride, yet a key service delivery agency failed in the way it did at such a critical time remains broadly unanswered.