Melbourne IT gears up for cloud competition 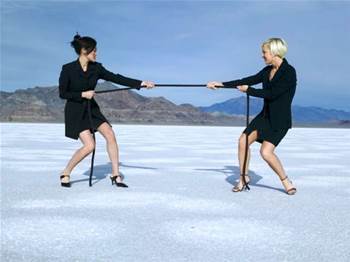 Melbourne IT has re-skilled its enterprise services team to address declining revenue and new competition from its telco partners.

Today the ASX-listed company blamed the “consolidation of hosting services” by partners for customer churn and poor performance by the enterprise services division in the six months to 30 June, 2011.

Melbourne IT chief executive officer and managing director Theo Hnarakis explained that some telco partners had begun offering hosted services from their own data centres.

Hnarakis said Melbourne IT's partner relationships remained “healthy”, but it was preparing to “go direct to market, rather than suck on the teat of telcos going forward”.

He said the company had reorganised its sales and account management team in the half-year to build a direct sales capability.

The reorganisation included the appointment of Peter Wright – formerly of Optus, Alphawest, Telstra and Qantas – as head of enterprise services in February.

Melbourne IT’s enterprise services division today announced a half-year revenue of $13.2 million to 30 June, down 24 percent on the year prior.

The division’s earnings before interest and taxes (EBIT) fell 75 percent in the period to $0.4 million.

It suffered the largest fall in revenue across all Melbourne IT’s business units, and contributed to an 11 percent fall in overall revenue and 30 percent decrease in EBIT (pdf).

A strong Australian dollar, subdued economic climate overseas, absence of large contracts and ongoing costs of a $25 million IT transformation project also contributed to what Hnarakis described as a “disappointing” result.

He said the company was optimistic about the second half of the year, as its marketing efforts around ICANN’s new generic top level domain program bore fruit.

Melbourne IT had attracted 17 registrations and 270 expressions of interest from organisations looking to register ‘.brand’ domains.

Reducing the cost of staff

In June, the company also kicked off a three-month offshoring pilot, for which it hired about five customer service representatives and seven e-business consultants in the Philippines.

If successful, the trial could see a portion of Melbourne IT’s 80 e-business consultant positions and 50 customer service positions moved offshore.

Each of those staff members cost between $60,000 and $80,000 a year in Australia, and half that in the Philippines, Hnarakis explained.

Melbourne IT expected to realise some benefits of the IT transformation project in coming months, as it eliminated duplication and retired legacy systems.

It plans to complete the rollout of a new Oracle Financials system in Australia, and a new billing and customer relationship management system in New Zealand by the end of the year.

The full program was expected to be completed by early 2013, delivering efficiencies that could result in job cuts for staff.