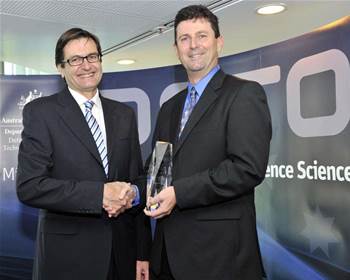 Technology to yield more targets, more of the time.

Greg Combet, Minister for Defence Personnel, Materiel and Science, applauded Gordon Frazer of the Defence Science and Technology Organisation (DSTO) for his contribution to the 'Over the Horizon Radar' capabilities of Australia and its allies.

Over the Horizon Radar involved bouncing radio signals off the ionosphere -- which is the uppermost part of the atmosphere -- to detect objects that were not traditionally visible.

Frazer said that Australian Over the Horizon technology could detect targets within a 3,000 kilometre radius as part of the Jindalee Operational Radar Network (JORN).

His new technique would allow transmitters to be positioned in two dimensional arrays, rather than in long rows, enabling a "newly exploitable property" that would improve coverage and fidelity.

"It was a [new] way of viewing how radars work ... we had a real penny-dropping moment," Frazer said of the technique.

"It will give us a revolution in performance: greater simultaneous coverage, more targets more of the time, and higher fidelity," he told iTnews.

Researchers were currently testing the technology, which was expected to be implemented during the mid-life upgrade of JORN, which was first constructed in the 1970s.

It would be active by 2019 at JORN transmitter sites in Longreach QLD, Leonora WA, and Harts Range in Alice Springs, Frazer predicted.

"Dr Frazer's personal and sustained contribution has been instrumental in assuring that the Australia remains the world leader in operational Over the Horizon Radar capability," said Combet in a statement.

"As part of continuous improvement Dr Frazer has developed a number of major technological advances in techniques, algorithms, software and hardware that have helped to address some significant limitations on High Frequency radar performance caused by the ionosphere."