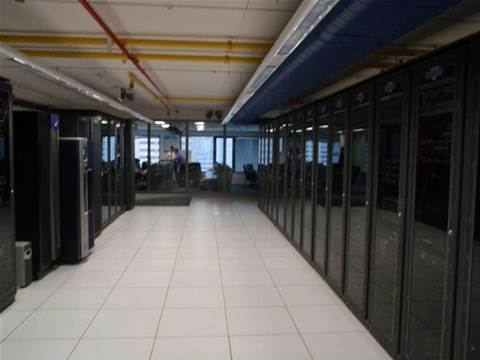 iTnews gets a first-look at how Macquarie Telecom is refreshing the managed services and ‘colo’ floors of its Sydney data centre – and we have the photos to prove it.

Macquarie Telecom’s Sydney data centre is undergoing a major refresh that will see the majority of racks supporting its managed services and managed co-location floors replaced by more efficient designs in the next three years.

The new racks are rated to various heat loads and include a sealed front door, inbuilt directional air-flow floor and incorporate intelligent power strips to enable Macquarie to effectively cool the rack and monitor power usage at the customer and socket level (see photo gallery right).

“The main difference in the physical design is the sealed –rather than perforated - door at the front of the rack. This gives us the best directional airflow within the rack itself and eliminates wasted cold air that simply blows out into the data centre.

Rowe told iTnews that the existing racks would be refreshed at the same time the equipment housed within them is upgraded. In the managed environment, that hardware is all owned by Macquarie.

It will take approximately two or three years to upgrade racks across the entire data centre.

Customers that are ready for hardware refreshes now will be shifted out of existing older-style data halls into an adjacent area that has been fitted out with the new racks.

The old racks will then be ripped out and replaced as well – a kind of rolling upgrade strategy that will eventually result in a completely upgraded data floor without impacting the environments managed on it.

One of the drivers for hardware upgrades in the data centre is virtualisation – although it is up to individual customers on whether they choose to go down that path. Whilst actively designing, building and managing virtualised hosting infrastructures for customers Macquarie does not force virtual servers on its customers, according to Rowe.

“We currently virtualise within a customer [environment], but not across customers within the data centre as a whole,” he said.

Interestingly, the trend to server virtualisation within some customers’ managed environments isn’t necessarily translating into the purchase of more blade architectures.

“At this point the jury is still out with regard to blades, particularly from a price-performance standpoint for our customer needs.”

Still, the fact that standard x86 servers are smaller and more powerful than their predecessors is resulting in similar consolidation benefits for Macquarie.

“We can get magnitudes greater processing power in a 1RU box as we used to fit in 5RU.”

This shrinkage and virtualisation growth, alongside hardware refresh cycles is effectively allowing Macquarie to grow the business within some the current data centre constraints around space, power, and cooling.

“As greening becomes a big factor we don’t believe the vendor hype. We test everything ourselves.”