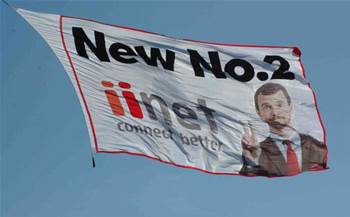 Customer complaints about iiNet jumped by nearly 50 percent in the year since the telco was taken over by TPG, according to figures published by the Telecommunications Industry Ombudsman.

The figures, published in the TIO's annual report, show the total number of new complaints about iiNet was up 48.2 percent year-on-year to 5698 in 2015/16, across both fixed-line internet and mobile services.

iiNet was acquired by TPG for $1.56 billion late last year.

TPG itself suffered a 7.4 percent jump in new complaints to 4836 during the financial year. The telco has been contacted for comment.

The trend was repeated at Optus, with the overall number of customers experiencing issues with their services growing by 18.2 percent over the past year to 21,992.

“While Optus acknowledges there has been a year-on-year increase in new complaints to the TIO, over the last three months we have seen improvements,” the spokesperson said.

The problems at iiNet, TPG and Optus contributed to a 22.1 percent growth year-on-year in TIO complaints to 38,877, the highest number recorded by the agency since 2010-11.

Overall, internet-related issues now represent 34.6 percent of all TIO complaints, up from 25.6 percent a year ago.

Billing and payments disputes were the most common category of issues across all service types, accounting for 41.6 percent of reported problems.

Slow data speeds was the most common category of faults for internet users, with the number growing by 48 percent to 7663 complaints, followed by 6994 instances of fully unusable services and 6680 reports of new connection delays.

The upsurge in internet-related maladies came despite the total number of complaints to the TIO falling 9.6 percent to 112,518.

“Complaints about mobile services have reduced due to better product offerings from telcos including higher data allowances and increased investment in mobile infrastructure,” TIO ombudsman Judi Jones said in a statement..