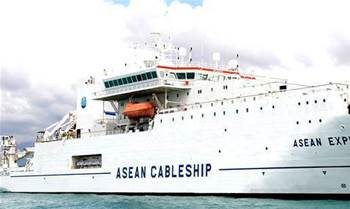 Internet link from Perth into Asia remains 'down'.

A submarine cable repair crew has identified a fresh instance of damage to the insulation of the SEA-ME-WE3 subsea telecommunications cable which connects Perth to Asia.

Multiple cables around Hong Kong were damaged back in late August by strong typhoons in the area, which has caused degraded performance and increased latency for some internet traffic.

The main damage affecting Australians is a break in the SEA-ME-WE3 cable, which still has an estimated repair date of October 13.

However, it emerged overnight that the cable laying ship Asean Explorer had identified a new “shunt fault” on the SEA-ME-WE3 cable.

A shunt fault is essentially the name given to damage to a subsea cable’s insulation. No root cause was discussed, although these can be caused by ocean currents or ship anchors.

Repairs have begun on the shunt fault and are expected to be completed around October 2.

While repairs continue, SEA-ME-WE3 remained “down”, according to advisories sighted by iTnews.