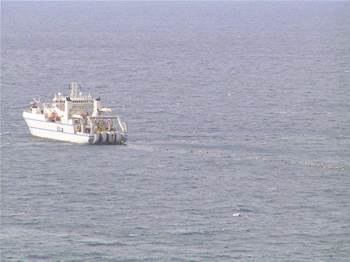 Australian internet service providers are warning users to expect increased traffic latency for the next six weeks after twin typhoons broke a number of subsea links between Sydney and Hong Kong.

Advisories by the TPG-owned iiNet and Internode report that the main issue for Australians is a cable break around 54 kilometres off the coast of Hong Kong.

“We have temporarily routed via the US and redirected peering whilst the issue is outstanding,” both ISPs reported.

“Our network partner is currently engaged with submarine teams for initiation of repair process.”

One of the affected cables is SEA-ME-WE3, which currently routes traffic from Perth to Singapore and beyond.

The cable has 39 landing points, including Deep Water Bay in Hong Kong.

Although repair teams have been engaged, SEA-ME-WE3 is expected to face problems for some time.

Wholesale operators have confirmed the break and said they have “received a tentative repair completion of 13th October 2017”.

“However these dates tend to change over time due to the nature of [subsea repairs],” the operators advised customers.

ISPs say that while they are forced to route Asian traffic via the US, internet users should expect speed, latency and packet loss problems “to international destinations in Asia”.

“This may result in webpages taking longer to load, as well as impact to time-sensitive activities such as online gaming,” they said.

SEA-ME-WE3 has suffered regular cable breaks over the years, including in 2015 and 2013.

Three cable consortiums have been vying in recent years to build a new cable on the Perth-Singapore route, thereby reducing dependence on the ageing SEA-ME-WE3 infrastructure.

Vocus’ Australia-Singapore Cable (ASC) is likely to be the first to lay cable, though other projects by Indigo Consortium and Trident remain on the horizon.

When typhoon Hato hit Hong Kong a week ago, it was the most powerful storm to hit the island in five years. It was immediately followed by a second typhoon, Pakhar.