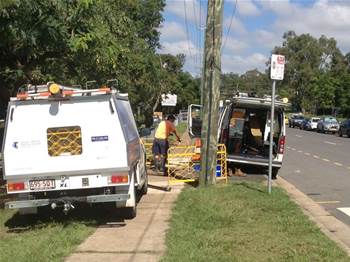 NBN Co first published its three-year construction plan in mid-October 2015. It was “intended” to be updated quarterly, but was left as-is for over a year until being formally canned in the lead-up to Christmas 2016.

The network builder said it would incorporate details once held in the three-year plan into its online rollout map and ‘check your address’ tools instead.

But the tools make details about the rollout available only to individual customers performing address look-ups - removing the ability to access a wider view of the build.

In the absence of an updated three-year construction plan, it has not been possible to check whether or not NBN Co is keeping pace with its rollout plans, nor how it is implementing its multi-technology mix.

Today, we change that by publishing in full an updated three-year construction plan based on publicly-accessible data held in the NBN maps.

The data was collated by hand and covers both premises that were in the existing three-year plan, as well as those that have appeared on NBN Co’s construction schedule since.

The 138-page document covers over 4300 suburbs and towns, and was collected by performing over 25,000 'pin drops' on the NBN online maps.

The full PDF of the new NBN three-year plan can be viewed here.

One important thing to note about the ‘old’ and ‘new’ three-year plans is that the performance metric has changed - for the better, although it has caused confusion in some quarters.

The ‘old’ three-year plan listed an ‘estimated time to commence construction’ date for each fibre serving area (FSA) or wireless serving area (WSA) in the rollout.

One of this metric's key flaws is that each FSA and WSA typically comprises several suburbs or towns, and construction does not start in all at once. Instead, construction is often staggered over 12-18 months, but this is not apparent just by looking at a single ‘commence construction’ date.

So NBN Co deserves some credit for dropping ‘commence construction’ and replacing it with ‘availability’ in its mapping tool. It sets a far more realistic expectation.

Things that look delayed may not be.

For example, NBN Co is reducing the time it needs to deploy FTTN in a given rollout area. Some areas are in ‘build preparation’ or are ‘build commenced’, but with ‘availability’ dates well outside the best-practice cadence that NBN Co has established.

This raises questions, but little more. Simply put, we can’t quantify whether or not these constitute delays. However, this will become clearer with time.

That said, there is much to see in the reconstructed three-year construction plan, including a detailed look at the suburbs and towns promised FTTN but now receiving either FTTC or fixed wireless.

Other parts of this investigation cover:

Update 2.21pm: An NBN Co spokesperson provided the following statement to iTnews, challenging the assertion that "it has not been possible to check whether or not NBN Co is keeping pace with its rollout plans, nor how it is implementing its multi-technology mix".

“NBN Co is very public about disclosing our future rollout targets in our annual corporate plan.

“We publicly display our progress towards these targets in our quarterly reporting when our senior executives are made available to answer media questions on the progress of the network build.

“In addition NBN provides an exhaustive weekly progress report on our website in which we give precise details of how many premises are ready for service and how many end-user premises have been activated on our fixed, fixed-wireless and satellite networks.

“The recent update to our 'check your address' web function now means that nearly all end-users are not only able to find out when they will be able to connect to the nbn but also what particular technology will serve their premises.

“The data in the 'check your address' web function is regularly updated so that end-users are able to check for any changes related to their future NBN connection."