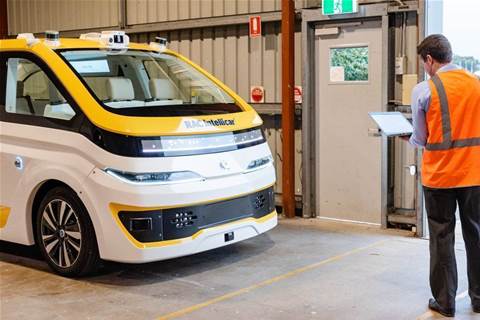 Perth is just one of three cities globally to test the Autonom Intellicar, which like Navya’s Intellibus trials in Sydney, Melbourne and Perth will allow users to book rides from their phones.

Unlike the Intellibus, which has a symmetrical design for multi-directional travel, the Autonom is shaped more like a traditional car.

And whereas the bus can carry up to 15 passengers, including standing room, the car version has seating for six and comes equipped with seatbelts.

The level 4 automation (self-driving but with the ability for human input) is fed by three LiDAR sensors, six cameras and four radars.

An Inertial Measurement Unit detects the vehicle’s motion and uses odometry to figure out how far the car has travelled and in which direction.

It also features ‘Real-Time Kinematic’, or differential GPS to pinpoint its exact location and how that relates to its base of operations.

On a full charge the car can run for six to eight hours, assuming passengers don’t drain too much of the battery with the USB charging stations dotted through the interior.

The three-stage trial will first operate on a closed track without passengers before eventually moving to public roads, where the car can travel at up to 50km/h.

RAC expects passenger trials will get the go-ahead at some point next year, although stage one is already a few months behind the initial April start date.

"Over coming years, vehicle automation will become more prolific within our transport network, which is why it's critical we conduct trials like these to better understand the potential impacts and opportunities,” RAC Group CEO Terry Agnew said in a statement.

"Providing a way for our members and the community to get involved is central to our trials, and the feedback we've gathered from participants since starting this journey with the RAC Intellibus(R) in 2015 has been very insightful.”

RAC expects more Intellicars will be delivered later this year. In the meantime, it’s working with the WA government to identify further trial locations around Perth.