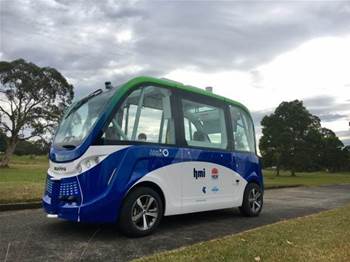 The NSW government's driverless vehicles ambitions are set to move into second gear, with $10 million provided in this year’s state budget to expand trials across Sydney.

The dedicated fund will be established to identify projects and partnerships with industry over the next four years, building on initial driverless bus trials conducted in Sydney’s Olympic Park.

That trial – enabled by the passage of legislation in August last year – is expected to run for at least two years, with the first public trips expected later this year.

It uses an Arma electric bus from French company Navya, which is capable of transporting 15 passengers at an average speed of 25 kilometres an hour.

The new funding will be administered by Transport for NSW’s Smart Innovation Centre, with $2.5 million set aside for each of the four years.

iTnews was clarifying details of the funding and the proposed trial locations at the time of publication.

“Having a dedicated fund for trials will mean that government, universities, the private sector and start-ups can partner together to test and gain insights into how these technologies will shape our future cities and regions,” he said.

“Driverless vehicles are going to change the playing field and open up so many new opportunities to provide personalised transport services.”

The state government is also planning to conduct other autonomous vehicle trials on some of Sydney’s busiest motorways this year with the help of motorway operator Transurban.

The trials will help ensure the state’s roads are compatible with automation technologies.