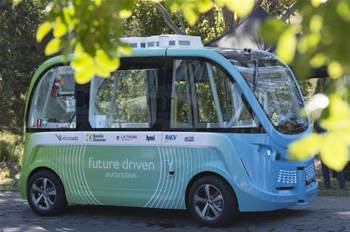 La Trobe University will soon start passenger trials of its autonomous shuttle bus, the Autonobus, after hundreds of hours of testing around its Bundoora campus.

Touted as the first of its kind in Victoria, the test rides not only look at how well a driverless vehicle functions on a closed loop with mixed traffic, but also how the general public responds to and interacts with the service.

The university is calling on the broader community, not just tech enthusiasts, to sign up for a ride. More than 500 expressions of interest have already been lodged.

The shuttle will operate both an on-demand service that collects passengers from designated stops as well as on a timed schedule.

The bus uses 360-degree cameras and multiple input sensors such as LIDAR to establish its location and recognise any potential obstacles.

A supervisor will be on-hand at all times to intervene should anything go wrong.

The university likened the Autonobus’s precision to a tram running along a set of tracks.

It also said the bus will be able to successfully integrate with complex traffic at intersections and roundabouts.

The project is a collaboration between the Victorian government, transport operator Keolis Downer, HMI Technologies, the Australian Road Research Board, and the Royal Automobile Club of Victoria.

Keolis Downer’s head of growth and innovation Jonathan Myers said the aim is to better understand how autonomous vehicles can connect passengers to existing transport hubs.

The bus was built by Navya, which also built the autonomous shuttle bus being trialled around Sydney’s Olympic Park.

The test rides will run until the end of May, with final trials wrapping up in July.