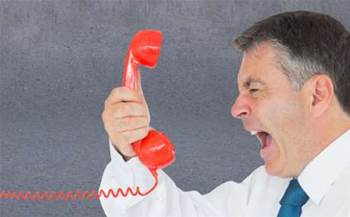 Grappling with third-party fault at same time as exchange fire.

"Severe" damage to a Telstra cable at a Perth construction site overnight has downed services for the telco's local customers, at the time same as the company was struggling to contain the fallout from a fire at a core exchange in Sydney.

Telstra users in the Perth area last night complained of having of no mobile, home phone, or internet services.

The telco confirmed an unidentified third-party had caused "severe damage" to one of its cables at a construction site in the region overnight.

It said its teams were working "around the clock" to get services restored for customers, and told iTnews the cable should be restored and mobile, home phone, and internet services back online this afternoon.

iTnews has sought detail on the cause of the damage.

The Perth cable problems come at a difficult time for the telco, which was yesterday forced to grapple with a fire that broke out in its Chatswood exchange in Sydney.

The telco confirmed the Perth cable issue was unrelated to yesterday's fire.

The damage to the exchange - which houses core routing and switching infrastructure for Telstra's national network - sent mobile and fixed services offline for customers nationwide for the latter half of Thursday.

It also caused text messages to be sent to the wrong recipients.

Telstra CEO Andy Penn was forced to apologise for the interruption to services, in the second fire to occur at a Telstra exchange within a year.

It's been a difficult 12 months for the telco, which in August pledged to spend $3 billion over the next three years to improve its networks and customer experience after a series of damaging outages earlier in 2016.