Crunch: Minister is a n00b; Violence at Telstra 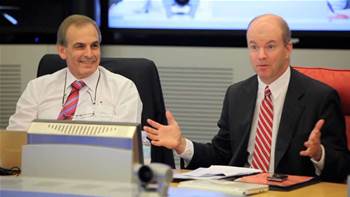 Telstra execs beat each other with laptops.

There is a good reason for the well known adage of never working with animals or children, unfortunately, its difficult to avoid the little brats if you are a politician touring a school.

On Monday, the Crunch went to Kogarah High School and watched as State Education and Training Minister Verity Firth spend half an hour talking to high school kids about their shiny new government-funded Lenovo netbooks.

She never seemed comfortable talking about the technology. And then one student asked her why some content and features on the netbooks were blocked.

The kid looked like he already had a dozen ideas on how to bypass the enforced proxy. Meanwhile, the minister was wishing she could have stayed at home and sent a proxy.

Then again, maybe she should have picked up his netbook and smashed him over the head with it. After all, that seems to be standard practice to solve disagreements in Telstra. Or so we were told at a technology update on Thursday, where Telstra execs were in a very jovial mood.

Renai Lemay from Delimiter explains: "There is a hilarious rivalry going on between Telstra CIO John McInerney and CTO Hugh Bradlow, they obviously banter back and forth about various technologies, which I think is awesome. Apparently Bradlow is not a massive fan of Google Docs and he said that if John was to introduce Google Docs into Telstra then he would throw his laptop at him - and one of them said that has happened before."

The two executives continued their banter later on when the subject of cloud computing came up.

The two execs were asked: What is the definition of cloud computing?

McInerney: If I asked Hugh, I would get a different definition [for Cloud computing] and we do often talk about that.

Bradlow: But mine would be right!

McInerney: Now you see my problem!

So if you are confused about the cloud, don't worry. You are not the only one.