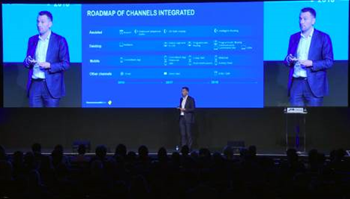 CBA gave 600,000 of its customers information about the cash value of expiring credit card points and a prompt to spend them, using a software engine, the latest sign that data is driving a change in thinking within the bank.

Head of data and decision science in CBA’s retail products and wealth division, Matthew Malady, told a Pega summit in Melbourne this month that the credit card points prompt was crowdsourced and then built and deployed in a day.

CBA’s Pega-powered customer engagement engine (CEE) is used to prompt staff about the most effective thing to talk to customers about, or to automatically prompt customers directly in digital channels such as the bank’s app.

The prompts are considered to be the ‘next best conversations’ to have with customers.

Since the program was first piloted in 2015, CBA has had 50 million conversations with customers at its branches or in the contact centre that used one of these prompts.

The number of prompts displayed to its digital channels has topped three billion.

CBA has always said the program is about having more “proactive, needs-based conversations” with customers.

Malady presented a growing body of evidence of what he saw internally as this shift taking place.

CBA recently revealed the bank is starting to ‘nudge’ customers to claim government money that they are entitled to.

Malady said that another example of these nudges came in the form of using credit card points before they expired.

“We ran a competition in Canberra a few months ago, where I stood in front of the area managers and said, ‘Whoever comes up with the best ‘next best conversation’ idea can come to Sydney and build that in a day,” Malady said.

“The simple one that won the competition was one helping customers use their credit card points that they didn’t know they had that were coming towards expiry, to help them understand they had the equivalent of x hundred dollars worth of cash they could use for shopping.”

Malady said the idea came from an area manager based in south-west Queensland; they were brought to Sydney to encode that as a ‘next best conversation’.

“By 2pm we had a ‘next best conversation’ live across our branch network for 600,000-odd customers who are now able to have a conversation that they could better use their credit card rewards points,” Malady said.

He said the bank planned to run more competitions “to highlight and keep that connection between our front line and our support office teams”.

Malady said that one of the key benefits of the CEE - and the customer relationship banking (CRB) program it powers - is that it has brought the different parts of the bank closer together.

Malady - who spent a decade in the branch network - said the bank had worked to integrate “experiences” across all the different parts of the bank that contributed to them.

“I remember when I was in a branch, there’s always this thing between the call centre and branch where everyone thought they were just sending their toughest clients that way,” he recalled.

“So we were getting customers who got sent in by the call centre and we’d yell at the call centre for sending them in - ‘why didn’t you look after them?’ And they would do the same to us.

“When you start to create really integrated experiences you can break a lot of those silos down.”

The bank got its first taste of integration at work in 2015 when it made it easier for prospective loan customers to book an appointment with a lender.

“Back in 2015, customers would go online and say they’d like an appointment with a lender. It would get sent via our CRM system out to our lending community, and ... for various reasons it was taking up to 48 hours to get to that customer,” Malady said.

“We were then able to start contacting our customers within 45 minutes and every single customer got contacted within 24 hours, so we were able to enhance the experience of the customer, but also break down some of those silos between our channels.

“All of a sudden we were working together to create great experiences.”

Progress has been - and continues to be - made bringing together silos from across the bank.

“Simple things like we’ve just released recently a much faster way of helping our customers understand when we change interest rates,” Malady said.

“When the home loan interest rates changed, and we announced our rate change at 6.30pm, by 1am we had a message out to all of our customers helping them understand what the rate change might mean for them,” he said.

“That was a cross-functional team that came together in that moment, from my team in data and decision science, the product teams, marketing and digital, to pull all that together, and we can execute that ‘playbook style’ each time.”

Malady indicated the bank had grown in its ability to sell the benefits of the CEE internally, and with that came progress in the types of conversations being had.

He said one of the keys was to “unblackbox the whole thing” and “provide transparency” into how the CEE works.

People became more interested the more we were willing to educate,” Malady said.

“With that education I feel we’re now at a point where we’re pushing on an open door.

“We started with products with a big list of things that we were there to go and deliver, but today we’re really able to take [the teams] an insight based on their business problem, [and] a contact strategy that will help solve that business problem.

“And we all work together to make sure we move that in market.”

Malady said that while part of the future trajectory for the CEE was clear, there were still unknown use cases to find.

Internal competitions - such as the one that flushed out the credit card points ‘conversation’ - could help the bank find more of these examples.

“When we started back in 2015, we didn’t really envisage where we would be today in full,” Malady said.

“We set out to achieve a hub of information that allowed us to make great decisions for our customers, but we’re orders of magnitude ahead of where we thought we would be.