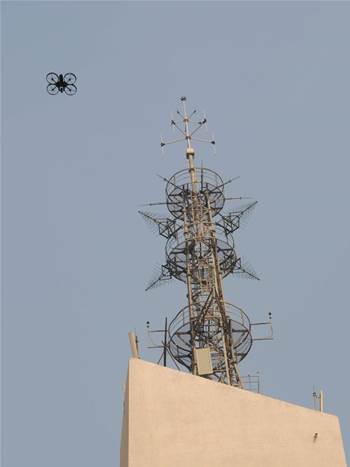 Perth firms A.I. Tech and Cyber Technology are among the new breed of UAV manufacturers and integrators to offer locally-built aircraft for sale and rental.

Australian companies have traditionally used craft built overseas, with US manufacturer Rotomotion a popular early choice. However, they are less favoured now than they were several years ago, as companies increasingly look to avoid the hassle of gaining US export clearances.

Read part one of iTnews' investigation into how Australian companies use UAVs.

Although HELImetrex operates a Rotomotion, CEO Ray Gillinder says the company will soon be "disbanding" it.

"Too long a setup time and too many moving parts essentially," he says.

Adam Technology has also stopped using Rotomotions. "Our pilots that we used to use to fly [Rotomotions] for us have actually set up their own company, and are manufacturing their own UAVs, which are a lot better," managing director Jason Birch says.

The US is trying to hasten export clearance of UAVs for foreign buyers as it faces a "record" $327 billion backlog of arms exports.

Although the action comes too late for some operators, it hasn't dissuaded all from buying UAVs made offshore.

HELImetrex, for example, has bought a German-produced Microdrones UAV, which is currently "on its way" to Australia.

"It's the same basic idea as the Rotomotion ones," Birch says. "They're what they call a 90 size helicopter with an autonomous flight controller attached."

Like many other UAV makers, A.I. Tech keeps most of its technical specifications under wraps. The company does not even maintain a web presence.

A.I. Tech director Kevin Lunn tells iTnews that the firm manufactures its craft "to do a job, not to sell on to other people.

"All the UAVs you buy off the shelf are built to a price," he says, warning the propensity of some players to use components more suited to hobby craft.

"Don't get me wrong here - we use an airframe that is from the hobby industry.

"We have to because it makes sense. There's no point in us spending $12 million on machines to manufacture an airframe that we can actually modify to our own technical specifications.

"But its the rest of the things inside the aircraft - the power systems, the dual downlinks and uplinks that we use. It's all these things that make our UAV very different from the basic UAV out there."

Lunn says A.I. Tech is "now starting to test fly multi-bladed rotor systems" capable of carrying a payload of up to ten kilograms.

"Although we do have multi-rotor platforms that we can use, we don't want to because they just don't have the runtime, the lifting capacity. They don't have so many things," he says.

"We find that what we have in our particular MX-880 is ... a lot of potential to do a lot of things with it without having to change the platform. We can fly faster, higher, there's a lot of things we could do."

However, Lunn says he and fellow director Nigel Brown have no problem building a UAV to meet a desired specification.

"Be it fixed-wing, rotary-wing or multi-rotor, it doesn't really matter which platform we need to utilise; it just depends on the job we've got at hand," Lunn says.

Fellow Perth manufacturer Cyber Technology offers fixed-wing and quad-rotor UAVs, though its CyberQuad Maxi is most commonly used for civil applications, such as on mine sites.

"We have a relationship with a manufacturer of a mature platform and we've just purchased those systems from them, and we're integrating them here in Australia with a gimbal, autopilot and transponder technology and all the things they need to be able to operate comprehensively in Australian airspace," commercial director Mark Stevens says.

"We've sourced all those parts individually and we're integrating them here in Australia, and then we're taking them onsite.

"We've got a series of nodes we've set up around Australia in the key areas where our clients are operating, and we're operating from there. At the moment they're all remote locations."

Some models were not raised by those iTnews interviewed but are known to be possible for civil applications, such as the Yamaha RMAX, Leptron's VTOLs and Lehmann Aviation fixed-wings.

Read on to the next page for UAV designs - VTOL vs fixed-wing.