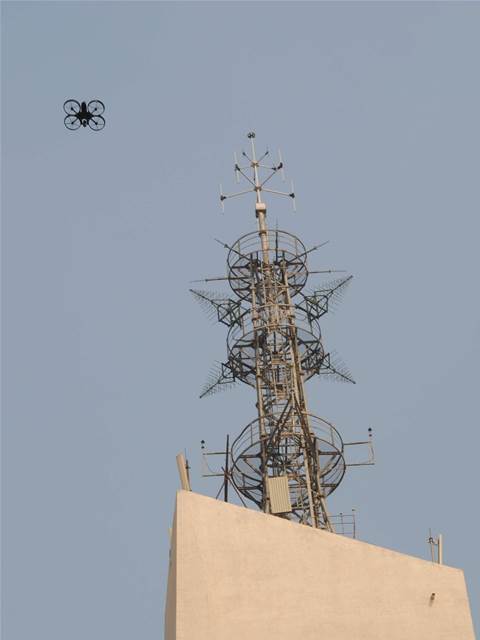 Linked gallery: Photos: Drones in Australia's mines
Page 2 of 2  |  Single page
UAVs come in two design flavours - fixed-wing and vertical take-off and landing (VTOL). By appearance, it's the difference between having an aircraft that resembles a plane or a helicopter (or quadcopter).

There are advantages and disadvantages of each type of craft, but essentially they can be boiled down to flight efficiency, image accuracy, take-off and landing, and payload capability.

While fixed-wing UAVs are generally noted for their flight efficiency for aerial mapping applications, they may face challenges operating in smaller, more confined areas on mine sites.

"However, they are also a bit limited in their operation and flexibility when doing closer range, higher resolution work."

For aerial mapping or stockpile surveys, several passes over a site may be required to build up an accurate image of the survey area.

The UAV's ability to turn around at the end of each pass impacts its flight efficiency.

"It's inefficient use of flight time to cover that relatively small area.

"A VTOL can pop up and position itself accurately within that half kilometre square to [go] back and forth quite time-effectively."

"If there's crosswinds then the images all have a skew to them unless you have a more sophisticated camera that allows you to compensate for that," Birch says.

"Because of the degree of sideways angle in the images, [fixed-wing UAVs] tend to fly very high overlaps which means you get a lot more photos for the same area.

"Even though they're flying faster and able to fly for longer [than VTOL UAVs], they don't actually get more coverage in the end because they're soaking it up with the extra overlaps to try and make sure there's no gaps between the images."

VTOL operators also see take-off and landing as a key area of ascendancy over fixed-wing craft.

Most fixed-wing UAVs require a landing strip for both take-off and land. The Gatewing X100 used by the Australian arm of Belgian mine giant Sibelco is slightly different, in that it uses a catapult launcher for take-off. However, it still requires a flat surface to belly land.

The makers advise "an 'airstrip' without obstacles measuring 30m wide and 150m long".

"The X100 lands typically within a 15m radius but due to barometric errors a 150m long airstrip is advised to be sure of a safe touch down," the company states.

Although this did not appear to be a hindrance to Sibelco, HELImetrex chief executive Ray Gillinder sees it as a disadvantage in the confines of a mine environment.

"What people fail to realise is on mine sites there's a lot of OH&S scenarios in place," Gillinder says.

"In certain mine sites [where] you've got a set of stockpiles or washer plant, you're working in a fairly confined area. There's sometimes not a lot of opportunity to put the aircraft down within close quarters."

Gillinder questions the long-term impact of landing a UAV on its fuselage, particularly on an unprepared landing strip.

"Mine sites are typically very rugged terrain, and a lot of bare earth," he says.

A YouTube video from Spain shows the wheel-less Gatewing X100 belly-land on flat, albeit rough, terrain. The undercarriage is not visible.

iTnews contacted the Australian distributor of the X100, Pitcher Partners, for comment, but a representative was unavailable at time of publication.

"We find that the availability of take off and landing [with VTOL] allows us to work a lot tighter, a lot closer [to mine infrastructure]," Gillinder says.

Portlock concurs: "You can take off from a compact area. You don't need to have a launching mechanism and a recovery area, so even if it's quite obstructed environment, you can still VTOL out of the small area you've got to work from".

Close-working is also a current regulatory requirement. The Civil Aviation and Safety Authority (CASA) only allows UAVs to be operated in visual meteorological conditions - i.e. within sight - and to a height of 400ft (121m) if special approvals aren't sought (pdf).

"Visual range is only about one kilometre at most," Birch says. "As soon as you get past a kilometre away you really can't see them.

"That limits how big your [flying] footprint is on a single flight anyway, which negates a fair bit of the advantage of a fixed-wing."

This article is part of a special investigation into the use of UAVs in Australian mines. Stay tuned to iTnews tomorrow for the next installment.