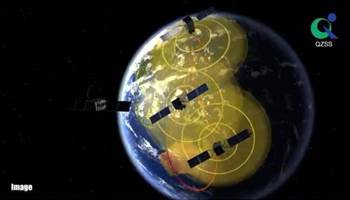 Researchers from Curtin University have found that Australians are able to pinpoint their location more reliably and accurately than ever before by exploiting Japan’s growing fleet of navigation satellites.

The research report, published in the journal GPS Solutions, outlines how Australians can use existing hardware to pick up both GPS signals and transmissions from Japan’s QZSS satellites, combining them to increase navigation precision.

Lead researcher professor Peter Teunissen, from Curtin’s School of Earth and Planetary Sciences, is urging industries like mining, surveying, aviation and driverless vehicles to take advantage of the improved accuracy afforded by the satellites now running along Australia’s east coast and cutting across Western Australia.

“Within the city itself and urban environments you have this type of ‘urban canyon' situation where, with GPS signals, you would not have sufficient [reception] to do precision navigation.

“The QZSS satellites have their own orbits that have been designed to be of use in Japan, but free of charge they also pass over Australia while continuously transmitting their signals.”

He said the QZSS is meant to be a regional solution, rather than a global one, meaning Europe and the US miss out on the free coverage.

The first of seven satellites was launched in 2010, with four currently tracing a figure eight orbit over Japan and Australia.

Teunisson said the final three satellites will be launched in the next two years, improving signal reception in Australia’s eastern regions, which he said can be a bit patchy due to the path of the QZSS orbit.

The federal government committed $160.9 million in this year’s budget to the ongoing development of a local satellite-based augmentation system (SBAS).

SBAS trials are already underway to improve the navigation abilities of driverless cars in Victoria and precisely guide planes into regional airports.