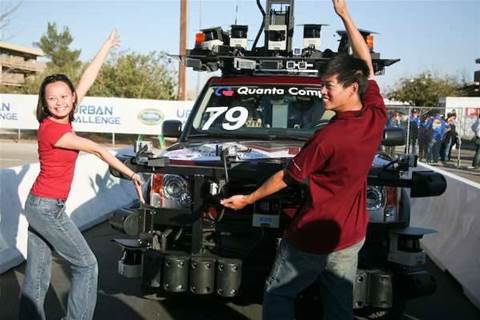 iTnews asks: How long before cars drive themselves?

But it could take several dozen years of societal and legal progress before the US$700,000 project renders human drivers obsolete.

"Autonomous cars right now are at a stage where they can do a pretty good job getting from point A to point B without hitting big things," said Huang, who is a doctoral student at MIT.

"[However] deploying in public areas requires much more than just technological progress ... I don't expect that to happen widely for at least several dozen years after the technology is ready," he told iTnews.

In 2007, the car was one of only six vehicles to successfully navigate a 96-kilometre obstacle course in the DARPA Urban Challenge for driverless cars. Some 89 teams had initially applied to compete in the government-sponsored competition, which offered a grand prize of US$2 million.

Like the internet and so many technologies before it, it is the U.S. military that is showing the most interest in autonomous vehicles as the technology develops.

Because the vehicles have the potential to reduce manpower requirements in danger zones, the U.S. military views this as a technology that could save lives.

U.S. congress mandated in the 2001 National Defense Authorization Act that one third of operational ground combat vehicles are to be unmanned by 2015.

"Deploying robotic ground vehicles on the battlefield [means they can] perform hazardous tasks that threaten the lives of American men and women in uniform," said Johanna Jones, who is a Public Affairs Officer at the U.S. Defense Advanced Research Projects Agency (DARPA).

Meanwhile, civilian car manufacturers have yet to embrace the technology. While manufacturers have demonstrated interest in autonomous fallback safety systems and vehicle-to-vehicle communication systems, a market for full automation has yet to emerge.

Huang expects a gradual introduction of robots into society, starting with controlled environments - for example, autonomous ground robots working alongside trained humans in warehouses - and progressing to more complex environments as their capabilities grow.

While he noted that his vision of robotics may not completely gel with that of the military, he expects a mutual interest in autonomous robots to encourage cooperation.

"My interest in robotics is fundamentally about letting us humans do things that we couldn't do before, either by making a previously impossible task possible, or by dramatically increasing the efficiency with which a task can be completed," he said.

"As with any new technology, there's always a way to subvert it and use it for ill gain or violent purposes, and I don't think the distinction necessarily lies at the civilian-military boundary."