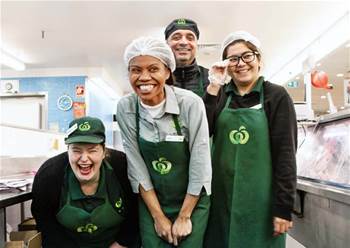 The supermarket and liquor giant on Thursday bowled up a 32 percent spike in annual online sales to $2.5 billion across the retail group, buoyed by a solid lift in earnings that delivered a whacking 56 percent rise in annual profit to $2.7 billion for the 2019 financial year.

The online performance of Australian retailers, especially supermarkets, is under intense scrutiny by institutional investors because online sales that are delivered to customers are for the most part margin dilutive and can cannibalise traditional in store sales.

Digital competition between retailers has intensified sharply over the last few years, with Woolworths, alongside recently demerged Coles, Wesfarmers’ Bunnings, Target and Kmart and Officeworks all seeking material operational improvements from billions invested in IT each year.

Recent forays of WooliesX revealed by iTnews include an new AI-based virtual assistant dubbed Olive to take load off human call centres and the deployment of more 1000 APIs.

But investor and analyst sentiment is mixed on whether Woolworths' wider tech-led improvements – essentially cost removal and higher productivity – can outpace the wider consumer trend to shop online that can potentially shrink profit growth.

On the store floor, results have sometimes been mixed. While self-serve checkouts are now standard in many stores they often process sales slower than regular checkout staff skilled at quickly scanning items.

At the same time, stock losses have oscillated – they jumped again in 2019 – but it’s not always clear how much of this is spoilage compared to customers dumping in-store or telling machines avocadoes are onions.

A key digital metric being watched by investors in the retail sector is the ratio of ‘click-and-collect’ online sales versus deliveries to homes and collection points.

Click-and-collect sales are proving the profit margin saviour for online fast followers Bunnings, JB Hi-Fi and Officeworks because they strip costs out of transactions, allow better stocking flexibility and land footfall into brick and mortar stores.

On Thursday’s media call, where only selected media were allowed to ask questions, Banducci did not talk to either the click-and-collect ratio or whether the claim of online profitability meant digital sales were accretive or dilutive.

The broad expectation is that they are still dilutive.

Pressed during the during the analyst call, Banducci said that while Woolworths’ “overall ecommerce business is profitable” it was remained margin “dilutive but at a rapidly changing percentage”, that is becoming less so.

The Woolies CEO also pawed at Coles’ statement noting how margins were  arrived at could vary.

A conversation that didn’t go much further.

But he called out click-and-collect as the margin big winner saying that it was now Woolies’ “most profitable channel right now”.

That distinction is important because it could flip margin erosion relatively quickly.

There was also now visibility of “availability of capacity across the home delivery network” he said, adding the “we have close to 800 trucks on the road at any one time.”