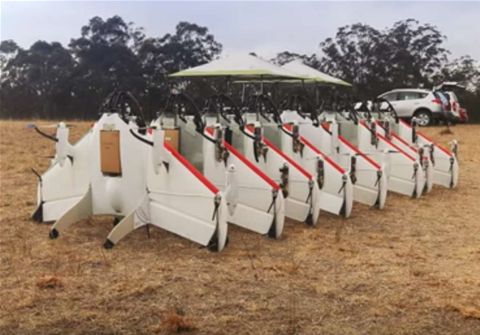 Americans think drone business will be worth over $100bn in a decade.

Google’s Project Wing drone delivery trial has been financially backed by the United States government, which believes the unmanned aircraft systems industry could reach A$108 billion in size by 2025 and create as many as 100,000 jobs.

As part of the government UAS development project, Project Wing will become operational at one of the Federal Aviation Authority's test sites.

The drones will be tested with external cargo loads to devise a way to fly them beyond line of sight at the Northern Plains UAS test site in North Dakota.

Tests will go from the ground surface to 29,000 feet (8840 metres) in the air, without chase aircraft, to try out the use of faster and heavier UAS at high altitudes.

Google conducted some 30 deliveries with the 1.5 metre wide and 0.8 metre tall drones flying at 40 to 60 metres in height to sites one kilometre away. The eight kilogram drones could carry a 2kg payload in the Queensland trial.

Now, the US government has said it will provide US$35 million (A$46 million) in research funding through the National Science Foundation to accelerate the development of UAS.

The US Department of the Interior will also explore using drones for search and rescue operations, and New York will support the UAS industry in the state with a US$5 million (A$6.6 million) down payment.

Some of the envisaged usage of UAS besides unmanned deliveries include research in precise gravity measurements, as well as weather, air quality and ocean monitoring.

To enable the development of a US drone industry, the government through the FAA has recently relaxed flight rules for UAS craft weighing less than 25kg.

Online retail giant Amazon has advanced plans for drone delivery that include test flights in the UK this year. Australia Post is also looking at drones for deliveries in partnership with UAS maker Ari Labs.