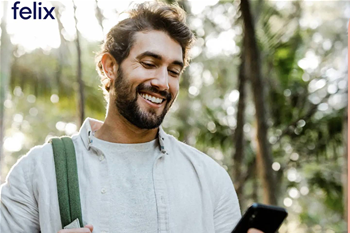 TPG Telecom’s new low-cost sub-brand ‘felix’ has launched with a single plan costing $35 a month and capping speeds at 5Mbps.

It has now launched its website, where it offers a single flat-rate $35 a month service that runs off the Vodafone 3G/4G network, and with speeds capped at 5Mbps.

At that speed, it said, video should still be viewable albeit at standard definition quality.

“We wouldn’t recommend downloading or uploading large files (for example >100MB), such as syncing to cloud storage as it may be slow to load,” the telco said.

The basic plan includes calls and texts to Australian numbers, and a $5 a month add-on allows for “standard calls and text from Australia to over 40 selected countries.”

Additionally, there is an international roaming option available for the same countries for $20 a year.

On paper, felix’s plan construct is similar to that of Telstra’s low-cost subsidiary brand Belong; however, the key difference is Belong’s plans [pdf] come with data quotas, after which users must either buy top-ups or face throttling to 64Kbps.

Optus is also planning to bring Singtel's low-cost Gomo mobile brand to Australia soon, meaning all three major telcos will have their own low-cost subsidiaries.

Subsidiary brands are expected to gain market share at the expense of mobile virtual network operator (MVNO) brands, marking the end of an era in Australian mobile telecommunications.