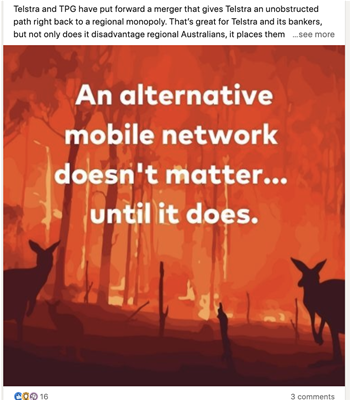 'A disappointment to our industry'.

TPG Telecom said it was “surprised” and “disappointed” by a social media campaign waged against its proposed network sharing deal with Telstra.

The telco said it and Telstra had lodged a response today to the “smaller set of submissions” made to the ACCC from opponents of the agreement, while welcoming “overwhelming support” from others.

Optus is the deal’s major opponent, and there has been no love lost in the regulatory tussle over whether or not the network and spectrum sharing deal should be allowed to proceed.

TPG Telecom said that “in almost all instances”, opponents had “failed to provide a rational argument” against the proposal, and in some cases had “mischaracterised” the proposal or relied on “factual errors”.

It accused “lobby groups and minor industry players” of not properly reading the details - or, more seriously, of “deliberately ignoring the information provided.”

Unsurprisingly, however, the fiercest rebuke was saved for Optus, and particularly the telco’s use of social media.

TPG Telecom's general manager of external affairs James Rickards said the telco “was surprised by the recent attempts by Optus and its leadership team to leverage the suffering of communities affected by bushfires and floods for social media stunts criticising the arrangement.”

“It is a disappointment to our industry Optus chose to use emotionally manipulative images of kangaroos seeking to escape a bushfire, in an increasingly desperate attempt to stop a competition-enhancing arrangement,” Rickards said.

“Such posts have been recognised by the Australian public for exactly what they are: misguided and inappropriate.”

TPG accused Optus of engaging “in scaremongering and rolling out its executives to trumpet the same lines regarding resiliency and future regional investment”, which it described as “an insult” to regional mobile users.

An Optus spokesperson has been contacted by iTnews for comment.

TPG said that Optus was concerned about losing customers and market share to a TPG that was newly bolstered by Telstra’s network.

“If [the network sharing agreement is] approved, TPG will finally be in a position to compete for Optus and Telstra customers and intends to take market share in all regions,” it said.