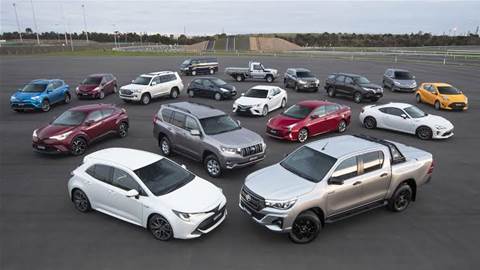 Toyota Australia piloted a personalised digital experience to draw prospective Corolla buyers into dealerships, but says more work is required to replicate this model for all future car launches.

Johnston-Bell said from the time a customer gets serious about a purchase to when they follow through is typically three months.

In that time, Toyota might have up to “900 interactions” with the prospect, “of which 71 percent are digital.”

“It used to be 4-5 visits to a dealership - it's usually about one now,” Johnston-Bell said.

“The dealer has that one opportunity to get you to buy that car.”

Toyota used a Corolla launch last year to test marketing personalisation strategies using specific pages on its website that were marketed via email.

The pilot ran as a “skunkworks” project across 10 weeks. Customers were marketed to based on four profiles of buyer, such as those concentrated on style, sports and performance, or value.

“What we want to do is create personalised content for each of those four areas,” Johnston-Bell said.

“We didn't go out and create a whole lot of new content; we just reused the content that we had.

“We generate a lot of content already, so there was so much that we had that we could just draw upon and reuse it.”

The results of the pilot confirmed what Johnston-Bell and his team suspected; that personalisation could work to increase foot traffic into the dealer network.

“These are significant numbers for us. We were able to show that personalisation is working for us. It's driving the engagement that we want with our guests into the dealerships.”

The team used Toyota’s Kaizen - continuous improvement - philosophy in the way they approached the implementation.

“One of the things behind Kaizen is incremental improvement. We don't try and make everything perfect the first go. Let's do something that's good enough, and then we improve it over time.

“That's what we did with the Corolla launch. We got [personalisation] in place and the next step now is to look at how do we extend that personalisation across other areas of Toyota.”

Johnston-Bell said that Toyota wanted to run similar campaigns across its vehicle range.

But, to make it work, Johnston-Bell said that the time and effort needed to execute personalisation would need to be significantly reduced.

“We need to actually productionise the personalisation approach,” he said.

“What we did with Corolla was a 10-week exercise. It was a lot hard work for everyone. I don't think anyone would ever want to go through it again, to be honest, because [while] it was a good lot fun at the time, it was an incredible rush of energy and all that sort of stuff - it's not sustainable.

“We need to get to the point where personalisation just become sustainable.

Additionally, Johnston-Bell is hoping to build more personalisation capabilities into the company’s My Toyota app, including some form of geotargeting.

“We want to start driving a lot more personalisation into the My Toyota app … using the app as a one-to-one relationship between us and the guest, and [to] drive some of those more one-to-one conversations,” he said.

“So as an example, you might be driving down the road, and you might get an offer on your mobile phone [from] the local Toyota dealer.

“If you showed an interest in buying a new car, and there's a sale on, we might ping you if you go past - things like that.”