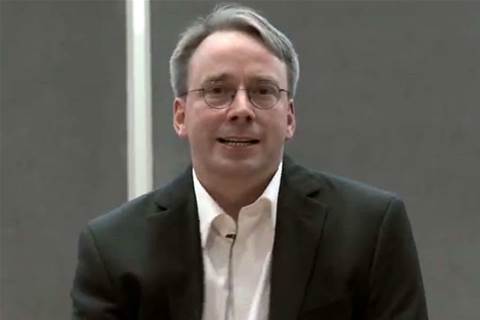 Open source guru Linus Torvalds has branded Nvidia as the "single worst company" that the Linux Foundation has ever dealt with to support the Linux operating system.

In a speech to Aalto University in Finland, Torvalds said Nvidia was "the exception rather than the rule" when it comes to Linux support.

Nvidia joined the Linux Foundation in March of this year, hoping it would "accelerate ... collaboration with the organisations and individuals instrumental in shaping the future of Linux".

The question starts at 48:22 minutes in.

"I'm ... happy to very publicly point out that Nvidia has been one of the worst trouble spot we've had with hardware manufacturers," Torvalds said.

"Nvidia has been the single worst company we've ever dealt with."

Torvalds immediately sought to clarify his position on Nvidia.

"Don't get me wrong. I'm not saying that other companies are perfect either," he said.

"At the same time theres a lot of companies that have been very helpful since very early days.

"I think it's very sad when you sell hardware and you actually use Linux, and you are being really difficult about it."

Torvalds' comments were overshadowed in part by a joke gesture towards a camera in the room.

They were also tempered by the likes of Ubergizmo, which noted that Linux driver support by Nvidia wasn't a new issue and that there were intellectual property reasons behind why Nvidia isn't as invested in Linux as Torvalds had potentially hoped.