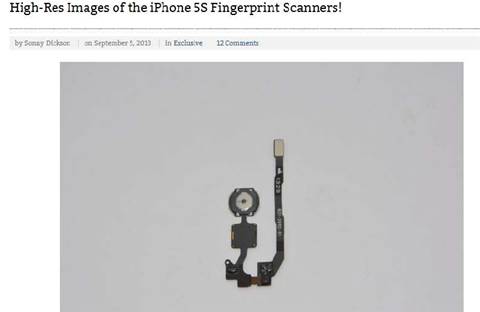 An Melbourne-based teenager who has built an online following by leaking pictures of upcoming Apple products has done it again, showing off the purported fingerprint scanner of the latest iPhone ahead of its expected launch next week.

Sonny Dickson attracted attention in August after he released detailed pictures and videos of the new grey and champagne casing on the upcoming iPhone.

On Thursday, Dickson leaked what he says are the first detailed pictures of the new model's new "home" button with its rumoured biometric fingerprint scanner.

"While the design differences have yet to be technically assessed, they could have a whole lot to do with the rumoured biometric fingerprint scanner that numerous pundits and analysts have predicted. In fact, we'd count on it," Dickson said on his website.

Apple, which zealously controls information of its new product launches in the face of rampant interest from consumers, has invited media to an event on September 10, where it is expected to unveil at least one new model iPhone.

Apple is expected to launch two new models this year, one with new fingerprint technology and a cheaper version in a plastic casing, widely referred to as the iPhone 5S and iPhone 5C respectively, according to supply chain sources.

Apple plans to dress up the 5C model in a range of five or six colours to differentiate it from the more expensive model that has traditionally come only in black and white, according to the sources.

Apple declined to comment on Dickson's actions, and he said they have never contacted him about it.

Dickson said he has five to 10 sources in China who buy Apple prototype parts directly from factory-line workers, which are then sold from $250 to $500.

His sources then send him photos and videos of the parts, which are posted under his name on his website and YouTube channel.

Initially communicating via Weibo, a Chinese microblogging service, Dickson said he and his suppliers moved to a secret website to discuss business.

"I've been doing this for many years, so I know what looks fake and what's not," said Dickson, a high school graduate with a penchant for luxury accessories such as watches that pepper his photos on the online Instagram service.

"I trust what they say to me - but I also back up the story with other people to make sure what I'm posting is legit."

Spending 12 hours a day maintaining his website, Dickson said his blog views spiked to a million hits last month, making him $2000 from web traffic in August.

"Most of the traffic is from the US - I've had 590 hits from Apple and about 53 from US Homeland Security in August," said Dickson, noting he had tracked IP addresses from Washington D.C. and Apple's headquarters in Cupertino, California.

While Dickson denies he is breaking any laws, experts are not so sure.

"He may not think or know he's doing the wrong thing, but a court would say Apple is one of the most tight and restricted IT producers in the world, notorious for locking things down," said David Vaile, executive director at the Cyberspace Law and Policy Centre at the University of New South Wales in Sydney.

"It's also possible that generating ad revenue will open him to a wider range of offences."

Dickson said he would stop if told to by Apple, where he has hopes of working one day.

"I'm not doing it just to piss them off - I still buy their products."