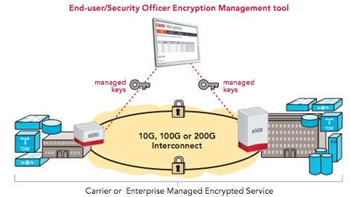 Telstra and its equipment suppliers Ericsson and Ciena said they have demonstrated strong encryption of data traffic over optical circuits on the telco's production network between Melbourne, Canberra and Sydney, with close to no additional overhead.

High-speed encryption at 200 gigabits per second was achieved with Ciena's WaveLogic 3 Extreme transponder, which has built-in data scrambling capabilities through the use of an application specific integrated circuit, the parties said.

The encryption is protocol agnostic, as the entire wavelength of light is scrambled before it enters the network, meaning different types of traffic such as Ethernet, SONET, SDH and Fibre Net can all be protected without having to individually encode/decode them.

Enterprise customers will have the option to manage the encryption themselves using Ciena's MyCryptoTool portal, or let Telstra do it for them.