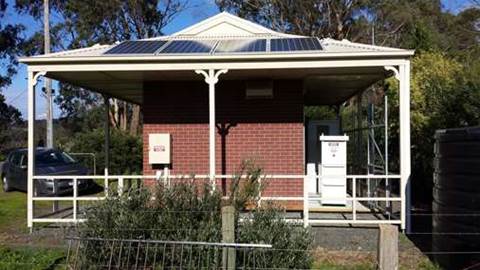 The Victorian exchange used to test the fuel cell.

Telstra is trialling the use ﻿of hydrogen-based backup power to keep exchange sites up and running in the event of a mains power outage.

In a blog post today, Telstra head of property John Romano revealed the telco had installed a solar fuel cell at a Victorian exchange about 90 kms east of Melbourne, on the edges of the Yarra Ranges National Park.

The hydrogen fuel cell has the capacity to provide eight hours of power in the event of an outage to the mains, and has been used six times in the past year for outages ranging from 12 minutes to seven hours, Romano said.

The system will shut down if an outage lasts longer than eight hours, Telstra senior technology specialist Rafiq Ali confirmed to iTnews.

However, the telco has the option of extending the hydrogen reserve should the outage happen during a sunny period (which means it can use solar power to undertake the hydrogen extraction) - but says it hasn't activated that feature yet.

Telstra opted to power the fuel cell by using solar energy to extract hydrogen from water on site then storing it for later use, rather than the common methods of either transporting hydrogen to a location in a cylinder or generating hydrogen on site using conventional electricity.

Australia's size and varying weather conditions pose problems for maintaining constant and reliable power for Telstra's network, Romano said, leading the telco to investigate other options such as renewable energy.

The telco is studying other network sites around Australia to deploy additional solar fuel cells for back-up.

"Not all the sites justify the return on investment but where it does, we will utilise them. It is a commercial and environmental decision," Ali said.

Telstra partnered with fuel cell company Sefca and hydrogen production systems provider Acta on the design of the system.

Ali said the key to the pilot was working out the total cost of ownership of such solutions compared to conventional battery or diesel generator backups.

"This approach is greener and more reliable, we are expecting a return on investment in the 3-4 year window."