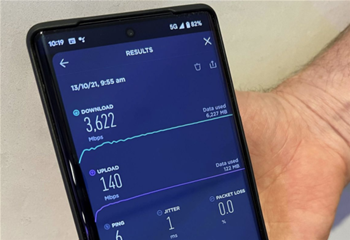 Telstra and Optus say they are both seeing multi-gigabit speeds on millimetre-wave (mmWave) portions of their respective 5G networks.

Optus’ managing director of marketing and revenue Matt Williams said “initial testing has delivered download speeds over 4.5Gbps in a commercial environment and speeds greater than 5Gbps in a lab using a fixed wireless modem.”

Both carriers were among successful bidders for the spectrum in an auction run in April this year.

They have also been building out mmWave sites, with Telstra having 50 sites online at the end of June, and 65 sites today.

Telstra intends to nearly triple that number before the end of 2021.

Optus said it has been testing mmWave - which it is branding Optus 5G Max - “for the last six months and really pushing it to its limits to achieve the best results for our customers in anticipation of device launches.”

“The average Australian consumer today experiences network speeds in the range of 25-100Mbps via 4G mobile or NBN,” Williams said.

mmWave technology is likely to be used in areas of intensive demand for bandwidth as it performs best over shorter distances.

Optus has previously called mmWave “true 5G” technology and indicated it could use the technology for a shake-out of the enterprise telecommunications market.

The new figures were shared as the latest Google Pixel smartphone, which is mmWave-capable, was announced for pre-order in Australia.