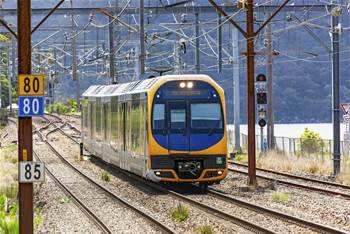 As part of mobile upgrade project along rail corridor.

Commuters should start to notice isolated improvements to mobile coverage along the NSW Central Coast rail corridor, with the first stretches of track now fitted with new mobile base stations and free station wi-fi.

Communications Minister Paul Fletcher on Friday said Telstra had completed the first stage of the $29 million mobile upgrade project between Hornsby and Wyong first promised more than three years ago.

The long-anticipated upgrade is aimed at improving the 68km commute for the 30,000-odd people who travel between Sydney and the Central Coast by train each day.

The trip, which snakes its way through various tunnels and valleys making mobile coverage difficult, often takes more than two hours each way.

The project has been jointly funded by the federal government, NSW government and Telstra, which have put in $12 million, $4 million and $13 million, respectively.

Telstra began scoping the infrastructure requirements of bringing improved coverage and station wi-fi to the rail corridor late last year after it was awarded the contract for the work.

The contract was used to investigate where mobile coverage improvements were needed on the 68km stretch of track.

On Friday, Fletcher said the first of 22 planned mobile base stations had been installed at Narara and that free wi-fi was now available at Lisarow, Mount Colah and Tuggerah train stations.

Fletcher said the upgrade was important to “deliver greater connectivity and productivity benefits to commuters along the 68-kilometre Central Coast rail corridor”.

“The first of 22 planned mobile base stations is now online with free Wi-Fi being rolled out at 19 train stations between Hornsby and Wyong,” he said in a statement.

“Building new mobile infrastructure reduces mobile black spots along this busy rail corridor and allows passengers to catch up on work or the news, and stay in touch with friends and family, while in transit.”

The next stages of work will focus on installing more mobile base stations and wi-fi infrastructure in other parts of the rail corridor.

“Telstra is excited to be working with the NSW and Federal Governments on this project,” he said.

“Our investment in this initiative will see us delivering connectivity along this section of the Central Coast rail corridor so Telstra customers can make the most of their commute.”

Other mobile carriers will also be able to “co-locate equipment for their services on the new mobile base stations”.