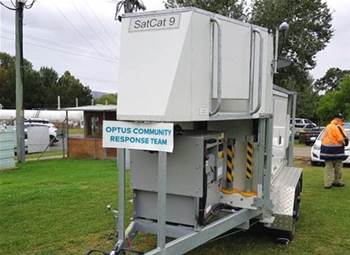 Telecommunications carriers are still scrambling to restore tens of thousands of services in South-East Queensland and the NSW Northern Rivers region after floods earlier this week.

In an update sent to iTnews, Telstra emphasised that with so much of the NSW Northern Rivers still underwater, it’s impossible to assess how long its services will be disrupted.

Power and access remain the main challenges. Until power is restored, Telstra’s (and other carriers’) towers can’t come back online, and the huge number of roads cut makes it impossible to assess infrastructure.

“We have technicians on the ground in areas we can access and we have more ready to go as soon as other areas open up,” he said.

“Many areas are however still inaccessible due to flood waters or are without power.

“We are working with power and local authorities to access the affected areas so we can get to work to bring services back online.”

Earlier this week, iTnews reported 5500 NBN premises were impacted by the floods in Northern NSW. This has now risen to around 67,000, NBN Co said.

“This site had been running on battery power, however the battery has been exhausted.

“Due to floodwaters it is not possible to access the site safely.

“The site is owned and operated by a third party and we continue to work closely with them to restore services as soon as it is safe.”

“We have generators on standby to support connectivity once we are able to access these areas”, the spokesperson said, adding that like Telstra, some of NBN Co’s work is hampered by floodwaters “still making site access difficult and unsafe in some areas”.

Earlier this week, there were 51,500 premises affected, and this has now fallen to just over 33,200 services.

“Continuing severe thunderstorm activity that has led to localised flash flooding and power outages may see an increase in the number of outages across areas.”

Optus told iTnews it had 80 sites down as of Thursday, and is bringing sites back online as quickly as possible.

The carrier hopes to deploy its SATCAT transportable 4G cells to Lismore and Ballina, once roads open.

The lack of road access has delayed getting generators to cell towers that need them, but Optus told iTnews as the waters recede and power returns, there will be opportunities to relocate generators to bring more sites back online.

Friday morning, NBN Co contacted iTnews to advise that there are now 74,000 customers impacted in the Northern NSW region.