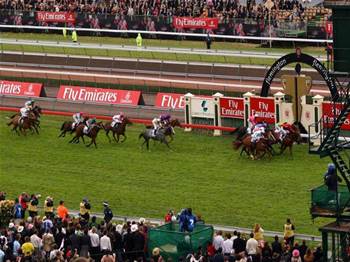 But cautious on cloud.

Tabcorp has purchased an infrastructure stack based on the "FlexPod" reference architecture promoted by Cisco Systems, NetApp and VMware, as the ASX-listed gaming company makes its first belated steps toward virtualisation.

The company's IT team currently labours to manage a mix of mainframe, mid-range and x86 systems, due in part to geographically distributed operations and the regulatory pressure applied to the gambling sector.

Simon Page, Group CTO at Tabcorp told iTnews at the Cisco Live! conference this week that the company's current infrastructure mix often results in projects "taking too long" to be delivered.

He expects that a templated infrastructure stack such as FlexPod has the potential to shrink infrastructure provisioning times from months down to days.

Tabcorp, he said, was a conservative adopter of virtualisation. But he sees an upside to being a late bloomer. The company is "lucky" to have skipped the first generation of server virtualisation, he said, as money would have been spent consolidating existing servers, without the benefits of running those workloads on the latest generation of infrastructure.

Page expects that starting from scratch with brand new kit in one corner of the data centre will enable the team to "very quickly make a difference".

The company is evaluating which applications it will port from its physical servers to virtual servers running on Cisco's UCS blades, Nexus 7000 switches and a NetApp FAS3200 storage arrays which combine to form the 'FlexPod' architecture.

Page hopes that being open with application development partners about Tabcorp's journey may convince them to re-architect their solutions for deployment on virtual servers.

But he anticipates that many will remain on physical servers.

"We are in a highly regulated environment," he said. "There are some applications that are obviously not our first candidates. It's not a quick journey to change anything in this regard, we will focus instead on the low-hanging fruit like dev and test, x86 applications and new projects."

Page said Tabcorp's business units will be offered a service catalogue of applications hosted on the new platform to choose from. But he doesn't see an urgent requirement for automated fulfilment of these requests.

Similarly, the company does not intend in the short term to plug data from the virtual machines into billing systems to charge back individual business units for the compute resources they use.

"What we are after is simply transparency," Page said. "We want transparency to the business about where costs lie."

Page also said the company was not yet in a position to determine if the infrastructure it is building could be used to burst onto third party data centres should conditions permit in the future.

"The obvious attraction would be if there was something we could do - while meeting our constraints around both performance and regulatory pressures," he said. "Yes, we are building an infrastructure that will be easier to cope with very volatile demand, such as during the Spring Racing Carnival. But I don't expect we will be integrating with public cloud offerings in the immediate future."

Page said the ultimate goal is for the IT team is to "not have to think about the plumbing, and concentrate the brainshare of the company on the experience of customers."

Tabcorp has previously invested in storage area network technology from the likes of EMC and HP.

In that sense, NetApp's arrays are "not a natural fit with the legacy environment," Page said.

Page said the vision of Cisco and VMware was integral to his decision. Tabcorp had evaluated both EMC's vBlock and NetApp's FlexPod architectures.

"I think a bit of healthy competition can only be good for customers," he said.

NetApp won the sale, he said, due to its "secure multi-tenancy" story, which better suits a highly regulated and distributed entity like Tabcorp. Its business units vary wildly in terms of the types of services provided and the jurisdictions under which they operate.

"The Cisco-validated design could ensure that the applications and data of individual business units could be protected from each other," he said.