Space: the final frontier for Scotty 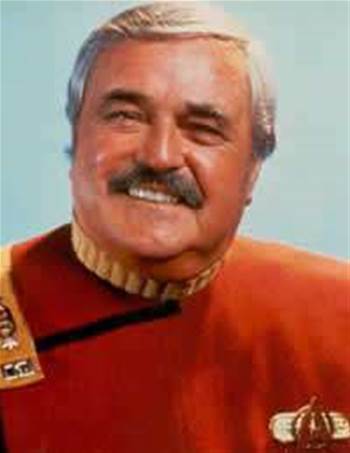 A memorial spaceflight carrying a portion of the cremated remains of James Doohan is set to take the former Star Trek star on a final journey into space.

Space Services Inc has announced that a rocket will be launched on 21 October from a New Mexico spaceport following a public service the day before.

The event marks the first anniversary of the death of Doohan, better known as Scotty, the engineer on the Starship Enterprise.

The so-called 'Legacy Flight' will also include memorials of American astronaut L. Gordon Cooper, and John Meredyth Lucas, a writer/director/producer on some of the original Star Trek episodes.

The Legacy Flight does not replace the Explorers Flight, which has been delayed since last year due to engine problems.

Legacy is being launched as an additional memorial spaceflight, as a courtesy by Space Services Inc's Celestis to the families of the deceased whose plans have been on hold.

The Explorers Flight will lift participants' remains into orbit for an indeterminate number of years, after which they will burn up in the atmosphere.

But the New Mexico launch is 'Earth-Return' where the capsules are taken briefly into zero-gravity space and returned safely to Earth.

This means that, at least symbolically, the participants could be said to have attained astronaut status. The capsules will be returned to the families as a keepsake, mounted on a plaque commemorating the voyage.

Got a news tip for our journalists? Share it with us anonymously here.
Copyright ©v3.co.uk
Tags:
finalforfrontieroddwarescottyspacethe