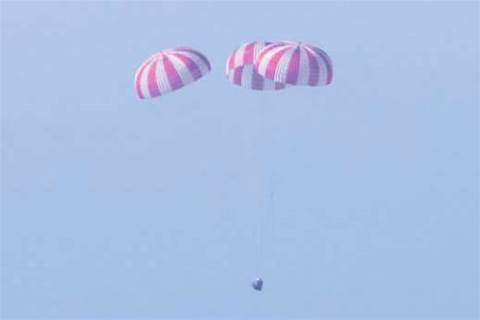 Dragon as it approached the Pacific Ocean. Credit: SpaceX

Operators of a three-metre-wide satellite dish in Mawson Lakes, Adelaide, spent the wee hours of yesterday morning tracking the US Dragon shuttle's descent from low-Earth orbit.

The facility was the only ground station in the Southern Hemisphere to be involved in US contractor SpaceX's inaugural trial of what may replace NASA's Space Shuttle fleet in 2011.

Dragon (pdf) was launched from Cape Canaveral, Florida, at 10.43am EST. It entered low-earth orbit 300 kilometres above sea level, orbiting the earth at speeds greater than 27,000 km/h.

University of South Australia researchers tracked the spacecraft's temperature, location, direction and systems information until it landed in the Pacific Ocean shortly after 2pm EST.

The steerable satellite dish was controlled by a "standard desktop PC". Data was received, stored temporarily and transmitted via a continuous, one to two mbps link to SpaceX at Cape Canaveral.

Jeff Kasparian of the University's Institute for Telecommunications Research said the project's IT requirements were modest.

"There's nothing amazing about [the PC]; storage is very minor," he said, expecting the trial to have generated approximately five gigabytes of data.

"What's important is that they [SpaceX] get the sort of forensic information that they need in terms of planning the next mission."

While the technology used was "fairly well known and proven", Kasparian said the Institute's satellite infrastructure was uncommon in the Southern Hemisphere.

The facility was established in 1998 as part of the Federal Government's Cooperative Research Centre for Satellite Systems.

It has since been used to track spacecraft including NASA's 2003 microsatellite CHIPSat (pdf) and the European Space Agency's Automated Transfer Vehicle in 2008.

SpaceX had a $1.6 billion Commercial Resupply Services contract with NASA to make at least 12 flights to carry cargo to and from the International Space Station (ISS).

Yesterday, it boasted of becoming the "first commercial company in history" to have successfully recovered a spacecraft re-entering from low-Earth orbit.

In the coming months, the contractor would conduct two more trials, with Dragon passing closer to the ISS in the next trial, and docking with the station in the third.

After the trials, Dragon was expected to shuttle supplies to the station every three months.

The Institute for Telecommunications Research had not been contracted for further SpaceX missions; however, "there was always the intention" that it would continue to support Dragon, Kasparian said.

Kasparian said that Australia's space investment was only one percent of that of the US, and was not in a position to contribute directly to International Space Station initiatives.

However, there remained "fringe opportunities" for Australian scientists and engineers, who could further niche communications technology with their research, he said.