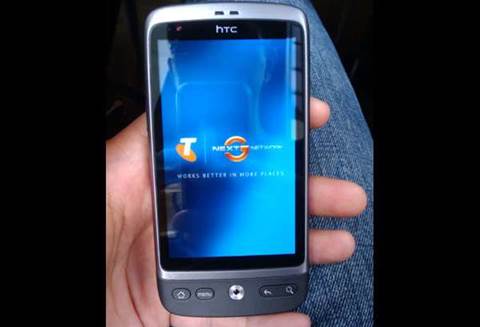 iTnews gets the industry's first glimpse.

iTnews managed to get our hands on a pre-production version of the HTC Desire Android phone to be released by Telstra in April for a short while yesterday.

Telstra CEO David Thodey announced a three-month exclusivity deal for the HTC Desire in Australia following a press event in Mobile World Congress in Barcelona, Spain, stating that "Australia's most advanced Android smartphone will be available to Telstra customers first."

After examining this pre-production unit [see gallery top right] iTnews.com.au can confirm that the HTC Desire has been heavily branded by Telstra as expected, although this is not to the detriment of the phone's performance or by removing any built-in Android features.

The HTC Desire displays a Telstra NEXTG bootscreen when starting up from a powered off state and there are many preinstalled Telstra related applications such as Bigpond TV, Whereis Maps, Foxtel, Yellow Pages, Sensis, Bigpond Movies, Trading Post etc.

However the fear that built-in Android Apps such as Google Maps (competing with Whereis) which clash with Telstra products would be removed will prove unjustified, as these apps have been left in place for the user to choose between the Android and Telstra offerings.

If retail versions of this phone are the same as this pre-production unit, then buyers will be able to install any of over 20,000 free or paid Android apps from the Android Market, unlike Optus which is still deliberately blocking Android paid apps while disingenuously claiming for the last year that this access "will be available soon".

Telstra chief technology officer Hugh Bradlow told attendees at Mobile World Congress this year that Telstra is now looking to be "more like a shopping centre than a stall owner" when it comes to mobile apps, providing its customers as much choice as possible.

In terms of hardware the HTC sports the new Android 2.1 operating system, a snappy 1 GHz Snapdragon processor, 3.7 inch WVGA (800x480) display and phone body which has a similar shape and weight/shape to Google's Nexus One Android phone, also built by Taiwanese manufacturer HTC.

iTnews first take is that the HTC Desire improves on Google's Nexus One in three key ways.

First, the choice of an optical trackpad instead of a mechanical trackball is a good move. Second, the Desire offers physical menu keys that offer tactile feedback which is lacking in the Nexus One because of it's touchscreen keys, and third - HTC's Sense interface - which offers a richer user experience than standard Android.