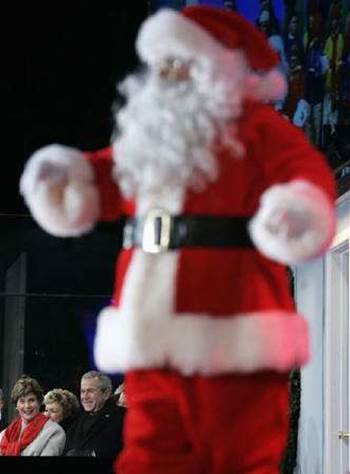 Santa, the star of the season, has found a new voice this year -- in blogosphere.

Santa, the star of the season, has found a new voice this year -- in blogosphere.

From his hatred of tacky Christmas lights to his fondness for Starbucks Venti Non-fat Almond lattes, Santa is speaking candidly this year about all things naughty and nice.

"I'm going to see if I can catch Mrs Claus under the mistletoe as I haven't seen her in a week," he posted on clauschronicles.blogspot.com.

The blog, which was started in November 2005, is full of lighthearted details including Santa's list of "100 Things About Me" (No. 24: "Rosie O'Donnell really annoys me"), an update on Comet's new baby reindeer ("it's a girl!") and his efforts at keeping fit (he's lost 41 pounds).

"Karen told me you had a blog like the rest of us," wrote contributor Poopie in a post. "I have ALWAYS believed, even when that little twit in first grade said you weren't real."

Over at Santa's Workshop, http://santaucl.livejournal.com, Santa's got a whole new attitude.

Garish Christmas light displays (pictures posted at uglychristmaslights.com), such as a home entitled "Camels" with glowing snowmen, Christmas trees and candy canes galore, is the topic of choice and this snarky Santa tells it like it is.

"Isn't it enough to say 'I like this season!' without having 15 inflatable Disney characters on your lawn, or a projection of Santa's face on your house?" posted Santa.

The site receives up to 20,000 hits a day, five years after it launched, said Matt Phillips, founder of the site, who chose the Santa pseudonym for anonymity,

"It's a silly type of site that pokes fun at people. That's the appeal," Phillips told Reuters.

With so many Santas now galavanting in cyberspace, creating a unique Santa persona does make a difference.

"You have to have a really distinctive voice and personality -- and in this case clever writing, I would think -- to stand out," said corporate blogging consultant Debbie Weil, also author of "The Corporate Blogging Book."

While her clients tend to be real-life CEOs over make-believe ones, Weil said the end result of having a blog remains the same.

"It makes you more accessible, and when people leave comments, it gives you influence too," said Weil.

She said it's also the bells and whistles, such as videos, podcasts and even an availability of different translations that contribute to a successful site.

Santa's journal, santasjournal.com, has already jumped in on the multimedia action. A podcast, YouTube clips, games and an online forum allow eager youngsters and young-at-heart adults to share wish lists and memories.

Even Lands' End, the clothing and home furnishings retailer, has its own Santa blog, http://hisanta.landsend.com, launched for the first time on Dec. 1. Its offerings include a scavenger hunt, photo contest and, of course, a podcast.

"We wanted to bring a fun, traditional aspect to the community and do it in a fun, interactive way," said Michele Casper, director of public relations at Lands' End.

"It's an entertaining, fun way to bond with Santa. There's no greater celebrity right now than Santa."

The onslaught of Santa blogs is not that surprising to Adam Sarner, an analyst at Gartner, a technology research firm.

"Just about everything you can think of has been blogged about. The craze has been reached," said Sarner who predicts the number of blogs will peak at about 100,000 million in early 2007. He estimates there are already 200 million ex-bloggers.

"There's going to be good ones and bad ones," said Sarner. "The more interesting ones can perservere."