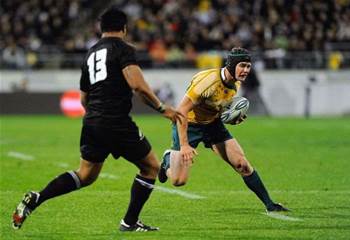 Cut out pass to Macquarie Hosting.

Australian Rugby Union has signed an agreement to host its multimedia-rich content with Macquarie Hosting after being disappointed with the solutions available from cloud computing providers.

The ARU's IT team, which manages the technology needs of the Wallabies, Super 14 clubs and 850 community organisations, went to market in search of a more flexible hosting environment - but Rugby's head of online business and IT services Paul Templeman said he was disappointed by most responses.

"When I joined the ARU [in] August last year, I walked in and found we had 15 servers hosted on machines that [were] four or five years old," he said. "Needless to say that [environment] wasn't offering great performance - so we went to market."

Speaking at a Cloud Computing event hosted in Sydney, Templeman said that Rugby's IT shop needed to adjust to changes in social media and broadcast technology, while meeting new content requirements from fans - and all while Rugby was reducing its IT budget.

At the same time, Rugby expected "some certainty of service levels and security" and wanted to avoid having to re-write any applications.

Public cloud solutions like Amazon's Web Services and Microsoft's Azure were immediately off the list, Templeman said, as they "required us to change our apps in some way."

But offerings from the traditional hosting providers were almost as disappointing, he said.

"None of vendors offered a true infrastructure cloud," he said.

The ARU received five formal responses from tenders - all from Tier 1 hosting providers and telcos. Every single provider proposed a virtualised environment based on VMware - but all but one proposed the use of dedicated host servers.

In addition, all wanted the ARU to purchase the hardware and amortise that cost over three years.

In Templeman's view, there were still major challenges around the virtualisation of the network and storage layer, preventing traditional hosting companies from offering a cloud-like service.

Templeman said the industry had not yet solved the challenge of offering an administrator complete control of virtual servers, network and storage from one interface.

He applauded the integration efforts of EMC, Cisco and VMware to solve this challenge, but also pointed out that this solution was "proprietary between three vendors."

"If that scales out to other vendors, it's going to be a lot more interesting," he said.

Nor has the industry worked out how to make cloud-based environments open and flexible enough for a company to shift their applications between cloud providers as they see fit, he said.

"What is required is a cloud equivalent to SNMP - Simple Network Management Protocol," he said. "Before SNMP, everyone was using propreitary tools to manage their network. Now you wouldn't think about using a tool unless it met that standard."

Templeman said he expected organisations to adopt cloud computing services in "small iterations", for new applications or test and development.

"A production-ready cloud is still a little way off in this country. There are not enough tools offered by the cloud vendors to take your internal physical environment to the cloud environment easily," he said.

There are also not enough guarantees, he said, as to equivalence of service in the cloud.

"How do you put an SLA [service level agreement] on a cloud service? How is an Amazon.com processing hour compared to using my Intel Xeon server? And in a shared environment, how do I know whether our performance will suffer if somebody else in that environment has a problem? It's not enough just to say, you have to trust us."

While he is satisfied with the services available through Macquarie Hosting, Templeman said cloud computing will eventually pose a big challenge to existing hosting models.

"The majority of hosting vendors have business models that are not based on utility computing. They still use three-year amortisation models. It's probably around 18 months before you'll see some of them come out.

"Hosting providers are worried. There is no doubt that [public cloud computes] will put pressure on traditional hosting vendors."