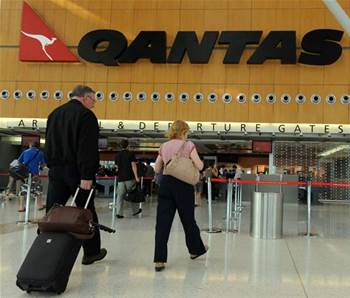 IT suppliers under pressure to lower costs.

Qantas has confirmed its IT team will be affected by a decision to cut 1500 jobs from the airline’s head office, after the company today announced a net loss of $235 million for the last six months.

In December, Qantas announced it would cut at least 1000 jobs over the next year in an effort to save $2 billion over three years, an initiative which would also include pay freezes and cuts for executives, the abolition of executive bonuses, and a review of how much the airline spends with its top suppliers.

At the release of its six-monthly results to December 2013 today, Qantas announced the program had been accelerated and the number of job cuts lifted to 5000, to be implemented by June next year.

Around 1500 of those would come from management and “non-operational” areas - such as its IT division.

At last count Qantas’ IT team sat at around 250.

The five-year Transformation program, first announced in 2011, is targeting $2 billion in cost savings by the financial year 2016/2017.

Qantas will implement 250 initiatives to meet this goal - including, it announced today, rationalising its software applications.

It also reaffirmed plans to renegotiate supplier arrangements with its top 100 suppliers, as first announced in December. These renegotiations are expected to save $150 million by FY2017, it said today.

In its financial results today, Qantas confirmed that each of these contracts will be subject to the review.

The workforce reduction program of 5000 staff is expected to cost the airline $500 million over this year and next in redundancy costs.

Qantas CEO Alan Joyce said the announcement was a result of some of the “toughest conditions Qantas has ever seen”. He called the financial results “unacceptable”.

“The Australian market has been distorted by current Australian aviation policy, which allows Virgin Australia to be majority-owned by three foreign government-backed airlines and yet retain access to Australian bilateral flying rights,” he said.

He said Qantas’ efforts to cut costs by 19 percent over the past four years had not been enough to counter the strong headwind the company has been flying into.

“With structural economic changes being exacerbated by the uneven playing field in domestic aviation, we must now take actions that are unprecedented in scope and depth.”

Qantas has been battling with the federal government for financial assistance to combat its struggles with Virgin Australia over prices, as well as weak demand and high fuel costs.

The Government had held back on offering assistance, but yesterday announced it would remove the "ball and chain" imposed on Qantas by the current legislation.