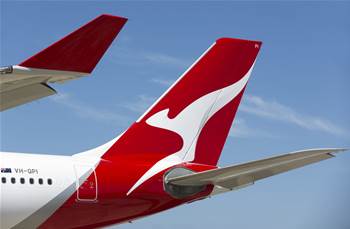 In addition to ending its relationship with Telstra.

Qantas is parting ways with IBM and Fujitsu, in addition to Telstra, under a major technology modernisation program.

The “natural” end of the airline’s large and long-running IT relationships was accelerated by the pandemic, which encouraged Qantas to be “bold” in coming up with ways to reduce its technology spend and to set the airline up for the future, according to group CTO Michael Ross.

Speaking as part of an Orro Group webinar on Thursday, Ross provided a sharper view of the impact of the past two years on Qantas’ Technology operations.

It was known that Qantas had renegotiated terms with its IT suppliers in the early part of the pandemic. The end of the Telstra relationship was also previously reported.

But many of the specifics, such as the end of the other major long-running technology agreements, were unknown. Ditto Qantas’ future-state architecture and partnership arrangements, which it is now clear will favour hyperscalers and more "niche providers" - such as Orro Group - that Ross said brought “depth over breadth”, as well as full stack offerings, to the table.

“We have felt through the course of the last two years within [Qantas] Technology that there’s been an opportunity to think about simplifying and untangling a lot of the legacy, given we’re a 100 year old business, and re-evaluating some of our partners,” Ross said.

Between them, IBM, Telstra and Fujitsu covered a large amount of foundational but non-differentiating infrastructure and systems, from hosting through to end user computing.

Ross was unequivocal in saying that all three tech giants had played crucial roles in powering Qantas and its technology operations over the past few decades.

“All of those organisations have been tremendous partners with Qantas for a number of years, and the partnership has been astounding,” he said.

“I think typically if you look at some of what Qantas was trying to do 10 years ago, there are only certain organisations in the world that could actually service what we needed, and the IBMs and particularly from a connectivity perspective the likes of Telstra were the only organisations that we could partner with, and again the service was phenomenal.

"I think, though, when you’re in technology and you have a partnership that sometimes spans multiple decades, it is sometimes appropriate to reflect on the relationship and challenge whether or not that relationship can come to a natural end, and if there’s a possibility to kind of reimagine how you move forward."

For some of Qantas’ 235 domestic sites, for example, the remote locations meant that only Telstra could serve them from a connectivity perspective.

It was only broader market movements, combined with technology advances in the areas of compute and connectivity in recent years, that opened up new possibilities for Qantas, Ross said.

These came at the right time for the airline, as the pandemic forced it to confront “how we could shut down an $18 billion business” and “vary more of our cost base” during a “traumatic” time for the company and the broader travel industry.

“Prior to Covid, many organisations would have never thought - outside of even travel and tourism - that their business could potentially flex down to zero,” Ross said.

“Within our business, with several hundred million dollars of spending on technology, we had a fairly high fixed cost base, and so we really challenged ourselves in terms of thinking about how we untangle from legacy, how we could simplify and remove customisations and bespoke things that we did, and how we could build more of a standard capability and a standard offering.”

Ross said there was “a degree of nervousness” from the airline’s executives and board when the end of the long-term IT partnerships was proposed.

However, he said that due diligence on new partners such as Orro Group - and close examination of its customers such as Australia Post, whose networking project involving Orro Group and others took out the 2022 iTnews Benchmark Award - aided in getting the business case through.

“We’re now transforming from on-premises into the cloud with AWS, [and] transforming our connectivity out of Telstra to a combination of Equinix, connected via NBN, managed via Orro,” Ross said.

“It’s been really impressive to see how seamless the changes have been.

“Sometimes there’s a nervousness when you find these niche providers that they may not have the scale to support either escalations or what the operational impetus that you currently have.

“But if you look at the underlying tech and the backbone and capability of the likes of Cisco, NBN, Equinix and all these others that make all these things work together, it really is incredibly robust.”

While most workloads are destined for AWS, Ross said the airline is approaching cloud migration with a “polycloud” mindset - that is, it will consume services from any cloud and seek to leverage its individual strengths. He indicated both GCP and Azure are in the picture for deployments.

Ross said that the combination of modernisation and working with hyperscalers is “reshaping” Qantas’ tech spend, and that Qantas’ tech team is also now substantially slimmer than it once was, shrinking from 500-plus down to around 170.