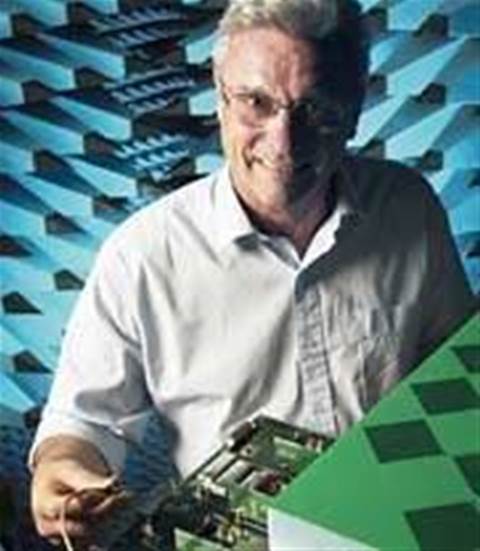 Radioastronomer John O’Sullivan could not have foreseen today’s wirelessly networked world when he sought to detect the theoretical Hawking Radiation more than 30 years ago.

He nonetheless credits those failed experiments for an Australian wireless LAN invention that plays a role in more than a billion devices worldwide.

Speaking with iTnews in advance of the Amplify 2011 conference next month, O’Sullivan described radioastronomy as a technology-based area that was “very much IT”.

The WLAN patent – based on Fast Fourier Transforms – was granted to O’Sullivan and his CSIRO research team in 1992 in Australia, and 1996 in the US.

It has earned the CSIRO more than $200 million from hardware vendors. Proceeds still fund the organisation’s ‘Science and Industry Endowment Fund’.

“I think we need to recognise that we need pure science; applied, directed science; and venture capital backing … to sustain a healthy technology ecosystem,” said the "semi-retired" researcher who has also worked in start-up and corporate IT environments.

“The numbers speak for themselves; we’re not funding science and technology at the same levels as many other countries. Where is the Australian Cisco Systems?”

According to the Federation of Australian Scientific and Technological Societies (FASTS), it was a “business as usual approach” to science, and missed “the opportunity to recognise science as a core part of the productivity and participation agenda”.

O’Sullivan declined to comment on the Budget, noting only that an Australian SKA would benefit local scientists, engineers and the IT industry.

From pure science to commercialisation

The researchers re-used the Fast Fourier Transforms technique in a later, separate project that aimed to reduce the interference experienced by wireless signals indoors.

“It was before the World Wide Web,” O’Sullivan said. “The internet was starting to be seen as quite important in the research environment … you could see where it was going.”

While the CSIRO researchers “didn’t invent wireless networking”, they set themselves the lofty goal of delivering 100 mbps over wireless – “the equal to the best fibre optics networks of the time,” O’Sullivan said.

“[Frater’s] vision was that skills built up from radioastronomy research could be applied to commercial areas, such as medical imaging and mine safety,” he said.

“There are so many connections,” he said. “[But] I don’t think you can say that things happen in radioastronomy and go to IT; it’s a two-way street.”

More recently, O’Sullivan has been working on developing phased array feed technology to increase the sensitivity and scope of the Australian SKA Pathfinder, said to be the precursor to the $2 billion SKA.

The key to inventing new technologies? “Reach beyond your comfort zone,” O’Sullivan said.

“My experience is you don’t see these things ahead of time, but if you push yourself, you do come up with a lot of solutions for different applications.