Pub punters can pay for beers, bets using their phone 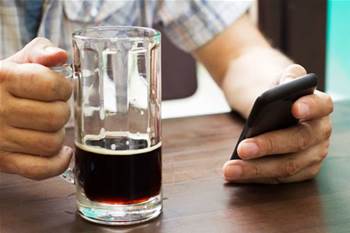 Tabcorp to roll out beacons in gaming outlets.

Tabcorp plans to roll out wireless geolocation sensors in pubs and clubs across New South Wales and Victoria in an attempt to bridge the gap between its online and retail channels.

Tabcorp will in 2015 offer partner pubs, clubs and other licensed gaming facilities the option of installing geolocation sensors within their premises to arm them with the means to make offers and track the consumption of smartphone-packing punters on the premises.

The initial trial - held within Tabcorp’s own facilities over recent weeks - used Bluetooth Low Energy beacons to alert the venue and Tabcorp to the presence of smartphone users from the moment they enter the premises.

Users can be presented personalised offers via push notification, as well as frictionless’ payments for both their punts and other purchases at the bar using their handset.

The app also promotes the forming of ‘punters’ clubs’ that meet in these physical locations, an attempt to bring a social experience to the personal digital experience.

For Tabcorp, it solves a critical issue as some punters consume racing and sport in physical venues via digital devices, reducing its partners’ income from wagering.

The company owns the exclusive rights to retail wagering in New South Wales and Victoria - much of which is exercised via partnerships with pubs and clubs.

TAB offers punters a ‘TAB locator’ function on its website, but users have shown a clear preference for using digital properties, growing at over 20 percent year-on-year.

As the use of digital technologies ramps up, “more people are using mobile devices for a punt,” said Kim Wenn, CIO at Tabcorp.

Such is the frustration that some retail venues have responded by “asking customers to turn their phones off” when enjoying the gaming experience within the venue.

“We continue to hold an exclusive retail license and we don’t want to detract from that - we do want to ensure the foot traffic is still going to retail points of presence,” Wenn said.

Tabcorp has taken in some 200+ ideas on how it might use digital to leverage the retail experience - and the beacon trial is one of two that have already made it to the prototype stage.

The company wants to use its digital prowess to drive punters back into pubs and clubs, but also to position the smartphone as a useful tool within that experience. If the line at the TAB machine is too long for a punter to place a bet in time for a race, the app is a fast alternative to place the bet, so long as the venue can be compensated.

Crucially, the beacon rollout will tell Tabcorp’s systems of record precisely where the punter made the transaction, and Tabcorp will look to review its venue remuneration model and share a sales commission with venue owners to compensate them for their services.

“We can ensure an integrated retail experience without any loss to the [retail] business,” Wenn said.

“Our clear objective is to maintain and strengthen our digital platform and take that success into retail. We don’t care how a customer transacts - as long its how they want to transact. We want everything to be a choice.”

Tabcorp will also pass on to venues much of the data it collects from the beacons - such as how long on average a punter waits in line to order drinks from a given bar, how long they spend in front of a given television screen, and so forth.

Tabcorp has hired a team of data scientists which have already started work on the data collected during the proof of concept phase. Wenn said once the company has sufficient data that can be “distilled into meaningful insights”, it will take those opportunities to its retail partners.

“The objective is to provide data and insights to our partners - so they know their audience better,” she said.

Wenn said Tabcorp recognised that its audience is getting younger and more interested in punting on a broader set of sports than those established for the purpose of gambling.

Further, those young customers are more often than not choosing Android as their smartphone platform.

“We have absolutely seen a shift from Apple to Android,” she said.

Neither ecosystem gets preferential treatment. Tabcorp’s apps are rolled out first on Apple or Android according to what new features have been made available.

“The two ecosystems tend to leapfrog each other in terms of features,” she said. “And we overlay both of them with a HTML5 offering.”

The beacon rollout begins in the first calendar quarter of 2016 in Tabcorp’s flagship stores.