Pope urges Catholics to give internet a soul 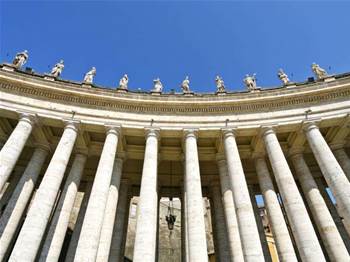 Pope Benedict XVI has told an Italian conference that Christians should take up technology and bring a measure of soul to the internet world.

Speaking at the "Digital Witnesses: Faces and Languages in the Cross-Media Age” conference the pope exhorted followers to get online and provide a spiritual element to online communications. He praised media workers for their initial efforts.

"I exhort you to walk the roads of the digital continent," he said, according to Catholic.net, "animated by the courage of the Holy Spirit."

"Without fear we want to set out upon the digital sea embracing the unrestricted navigation with the same passion that for 2,000 years has steered the barque of the Church."

Pope Benedict also warned about the digital divide separating rich countries from poor and warned that more must be done to bring those without a voice online.

The current pope has done more than most to embrace the digital age, reaching out to young people to get online and offering text messages of his thoughts to the faithful.

Got a news tip for our journalists? Share it with us anonymously here.
Copyright ©v3.co.uk
Tags:
agebenedictconferencedigitaloddwareonlinepope