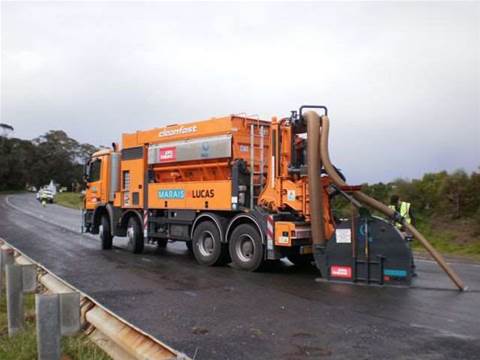 Linked gallery: Down in the trenches - rolling out Tasmania's NBN fibre network

Engineers from French and Australian joint venture Marais-Lucas Technology have begun cutting up a thin trench across the Tasmanian landscape north of Hobart for the first fibre cable of the National Broadband Network to be laid.

The trench, being built over a seven kilometre path between the Aurora Energy data centre in Cambridge and the coastal town of Midway Point, is being dug by a $1.2 million Mercedes Benz truck fitted with a massive serrated cutting wheel, a vacuum and other trench-building smarts.

Just over one kilometre has been dug so far after one and a half days of work.

The 12-metre long, 23-tonne Cleanfast truck [pictured in gallery top right] was imported by Marais-Lucas Technology, which was contracted alongside John Holland Group by Nu Energy, a subcontactor of Aurora Energy.

Built from scratch, the Cleanfast is based on similar models used for Fibre-to-the-Home (FttH) rollouts in Europe, only with right hand drive (steering wheel) and an extra two wheels. (Australian standards have set lower maximum axle loads, meaning the machine requires eight wheels for use in Australia as opposed to six in Europe).

The wheel-shaped cutting tool connected to the truck is capable of cutting 600 metres of shallow trenches per day, while simultaneously sucking the spoil (dirt) out of the trench using an industrial-strength vacuum.

A spokesperson for Marias-Lucas told iTnews that based on the progress the machine made on its first day of digging, it may cut up to 800 metres per day during the Tasmanian NBN project.

"What you are watching here is the first kilometre of backbone network for the NBN project in Australia," said Gael Courcoux, managing director of Marais-Lucas.

Separate machines can trail the Cleanfast to roll in conduit and backfill the trench with a proprietary mortar developed by the Marais Group in France.  This mortar consists of an elasticising agent to ensure the mortar will not interfere with other materials (such as road tar), and is also tinted a bright pink colour to warn future excavators of the area that fibre cables are present.

Marias-Lucas has several more Cleanfast machines in France, but would need to build new machines from scratch should the company be contracted to dig more trenches.

Courcoux said the company expects to win significant business once an official tender is released for the build out of an FttP network to 6000 Tasmanian homes.

Courcoux said the first seven kilometres of work was "a quick tender" released by Aurora Energy, because the "job was very urgent."

"The next step is to start the NBN project on a large scale, through a real open tender," he said.

Tasmanian Premier David Bartlett said the use of the Cleanfast machine in Tasmania shows that the state is "leading the way.

"This technology is the first of its kind to be used in Australia," he said.