Pega CEO Alan Trefler back in Australia for talks with NAB 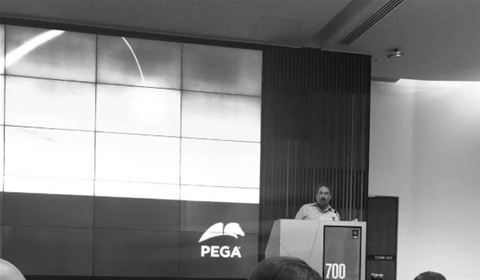 Presents roadmap to NAB and other customers.

Trefler was in Melbourne earlier this week, meeting with NAB’s Pega tribe and enterprise process automation team at the bank’s 700 Bourke St headquarters.

Photos from the meeting showed Trefler presented on ‘Project fnx’ - pronounced phoenix - which is described as “the internal codename for an ongoing evolution of the underlying architecture of Pega Infinity”.

NAB staff that attended the presentation said that it had covered the pipeline of future upgrades to Pega’s functionality, including “cutting edge robotics and AI capabilities.”

“Alan is dividing his time across Sydney, Melbourne and Canberra to meet with selected customers and prospects across several sectors including banking and finance, government, and insurance,” Evans said in a statement.

NAB was revealed earlier this year to be one of the first adopters in the world of Pega Intelligent Virtual Assistant (IVA) software, a bot that can “read, route, and respond to emails”.

IVA is considered the “star” of the NAB Universal Workflow or NUW, which is essentially a framework of reusable components that units and teams from across the bank can use to digitise processes to improve customer service.

NAB has also put Pega-powered ‘bots’ to work in home lending and third-party cheque verification processes under an ‘operational excellence’ program of work it started in July last year.

Other major Australian users of Pega’s tools include CBA - where it powers the bank’s customer engagement engine (CEE), suggesting contextually-relevant conversations to have with every customer when they next engage with CBA - as well as Optus and HSBC Australia.

Trefler has previously visited Australia in 2017, launching a collaboration with the University of Canberra around ICT skills and training.