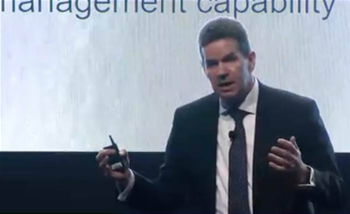 NAB has let 19 “email listeners” loose in eight of its business units since July last year, automatically triaging tens of thousands of emails in a bid to improve customer service.

The bank is one of the first adopters in the world of Pega Intelligent Virtual Assistant (IVA) software, which is pitched as a bot that can “read, route, and respond to email”.

IVA is considered the “star” of the NAB Universal Workflow or NUW, which is essentially a framework of reusable components that units and teams from across the bank can use to digitise processes to improve customer service.

Pega IVA uses natural language processing (NLP) to pull the action item out of emails and then direct it to the right place within the bank.

“I'm sure many people [who] work for any medium or large corporate are as tied to email as we are. We are frankly avalanched with the stuff on a daily basis,” NAB’s process automation general manager Jonathan Tanner said.

“When we look at what our customer servicing and our operations teams do, they spend a huge amount of time reading, interpreting, and triaging emails from customers and bankers and internal teams.

“We have bankers out in the field who get a request in their email from a customer that they just forward that straight back into a central mailbox somewhere, and somebody else then has to read down 15 layers into that email and try and figure out what actually needs to happen.

“As you can imagine, it's not an efficient process but equally it's not a great customer process as well because a lot of it is very much a point-to-point communication so things get lost and and increasingly as well there's misinterpretation of what's been asked.”

The bank has only been using IVA in production since July last year but has already stood up 19 “email listeners” within various parts of the institution.

Tanner said that not all parts of the bank touched by Universal Workflow would wind up using an email assistant.

But he said those that did had already seen “immensely impressive” results.

“We've had about 34,000 emails that have already been passed through [IVA] and we're getting roughly about a 75 percent auto classification rate,” Tanner said.

“That's 34,000 emails that used to require a human to look at them, think about how to try and figure out what's going on, phone somebody up, etc.

“In the first three months of the platform going live, we obviously took things easy - we didn't really want to push the boundaries too much.

“But over the last few months, we've brought on a lot of teams. We put two new teams on [IVA] about a month ago in our merchants area within the business bank.

“They respond to roughly about 3000 emails a week. Our original premise was that we would get something in the region of about a 40 percent auto classification on the first pass with our models that we've built, but we hit literally 70 percent within three weeks. It was really, really impressive.”

Tanner said that the merchants area owned and could tweak the model used to classify the emails as and when they liked.

He indicated that in the future it was likely that business units and teams would do much of the development and provisioning work when taking advantage of Universal Workflow, requiring less and less involvement from NAB’s technology teams.

Universal Workflow is essentially about improving the efficiency with which NAB handles communications.

The program of work is targeting a 15-20 percent uplift in efficiency, a 20 percent reduction in customer follow-up enquiries, and - in general - a more satisfied customer base.

“This user-friendly system will help you manage cases across the NAB Group, making things quicker, simpler and easier for you at work, and providing an exceptional customer experience,” the bank said in its internal pitch to staff.

“NUW includes some great features that will make it easier for us to serve our customers. This includes consolidating all contact with customers so you have all their information in a single place.

“You can talk to a customer on the phone and capture the details at the same time.”

NUW consists of a set of a framework and reusable components that are hosted on AWS.

The idea is that teams wanting to shake up internal processes and workflows can have a redesigned workflow “designed and built in weeks.”

“NUW allows us to be very consistent in the way that we both manage work internally within NAB,” Tanner said.

That consistency should drive a set of case management standards across NAB, from case creation to performance reporting.

“It doesn't matter whether you're in a customer servicing team or the group tax team, you will be working off the same set of components and the same sort of case structures, so we can be very efficient and effective in the way that we manage work internally,” Tanner said.

One of the central aims of Universal Workflow is to get the business users creating as much of what they need as possible.

“What's really important to us is it had to be business configurable,” Tanner said.

“We want to increasingly move people away from code. We want people to be thinking about the customer problem they're trying to solve, not thinking about how they can code up the latest algorithm to make this thing work better.”

Another aim is to be in a better position to examine just how well NAB performs in its customer service.

“Something we're in that's in development at the moment and will be available in the next couple of months is … some more strategic reporting,” Tanner said.

“We will have an ability where we can start doing things like what-if analysis and trend analysis around work that is flowing through our organisation and actually really start to look at some of the trends, particularly around customer service - where we're meeting service level agreements (SLAs), where we're not meeting SLAs, and what can we do about that to improve the service to the overall customer.”

Universal Workflow also allows the bank to move away from a “monolithic” view of case management.

“We can set SLAs at both the case level and at the assignment level as well, so we're not limited to just thinking about cases in a very monolithic way - we can have federated cases where we can push work [to multiple teams or people],” Tanner said.

“We can take in a single customer request, we can split that into multiple assignments, we can achieve SLAs against those assignments and then bring it back up so that the customer gets a full outcome around their requests.”

Tanner said NAB is using “demand squads” to go out into the bank and scope potential use cases for Universal Workflow.

“The demand team go in first - they're our scouts if you like - and do the initial scoping work,” he said.

Other use cases are brought to the Universal Workflow team by the bank’s business process transformation team.

“They're often the ones who are bringing the opportunities to us when they start to see those through some of the work that they're doing,” he said.

As the Universal Workflow team has enabled more successful projects - it has done 60 since July last year, covering 210 unique business processes - it is getting more direct approaches for assistance.

“Frankly, we can barely keep up at the moment. We have people beating a path to our door on a daily basis, wanting to talk about how they can get on board and get involved.

Not every use case brought to Tanner’s team was well-suited to Universal Workflow - and Tanner indicated the bank was not driving poorly-fitting processes into NUW.

“We are doing work outside of Universal Workflow within the bank,” he said. “There are times where we look at it and go, 'Actually, you need something a little bit different here. So we're not going to not talk to you, but we're going to talk to you in a little bit of a different context'.”

Tanner said some of the current emerging use cases were in the area of the bank dealing with financial crime and know your customer (KYC) processes.

“One of the areas we've been working very heavily in is with our KYC teams and our financial crime teams,” Tanner said.

“We will eventually be managing pretty much everything that comes out of our financial crimes detection systems on Pega as anything that needs to be case managed.”

Specifically on the KYC front, Tanner said that every year the bank had to “go through all the people who've got dormant accounts or accounts that haven't been accessed for a period of time, and check and make sure that our details around those people are current. If they're not, we have certain remedial activities we need to take.”

Tanner said that this process was “ very manual” and involved a “very heavy duty kind of churning through cases.”

“They were managing most of that off spreadsheets, SharePoint, you name it,” he said. “We've now put that onto Universal Workflow.”

Applications were also emerging in the bank’s home lending operations.

“Obviously, responsible lending is something that's in the press a lot nowadays. It is really important,” Tanner said.

“We're currently developing a platform where we really use Universal Workflow as the harness for how we manage work by our verification teams.

“We found that roughly about 90 to 95 percent of the verification tests we currently do manually could actually be run by a bot, so this is really quite important stuff for us.”

NAB indicated there was "50-plus" opportunities in the Universal Workflow pipeline for FY19 alone.

Tanner said that NAB’s progress with the Universal Workflow so far had been “great” and “impressive”.

“But there’s a massive [change] agenda ahead,” he added. “We're really excited about that.”