PayPal expands into more US stores 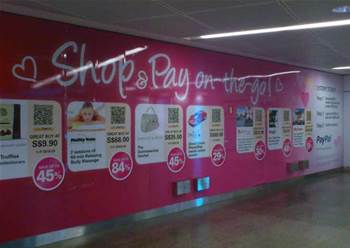 PayPal is extending its reach to more physical stores, having signed up 50 merchant acquirers which help process payments but the eBay Inc unit has yet to persuade Wal-Mart Stores Inc, the world's largest retailer.

PayPal's expansion into brick-and-mortar stores gives the company access to a market that is roughly ten times the size of the online payments sector where it got its start over a decade ago.

Recent deals for Discover Financial Services, PayPal's offline partner, will help extend PayPal's in-store payment service to more than two million outlets in the United States by the end of 2013.

Total System Services Inc and Heartland Payment Services Inc, two of the largest merchant acquirers, signed up in recent weeks, joining other big players such as Vantiv Inc, WorldPay, Global Payments Inc and First American Payments, according to executives at Discover and PayPal.

Linking up with merchant acquirers is crucial to the PayPal offline push because these companies are important cogs in the payments ecosystem, signing up and underwriting merchants for payment networks including Visa Inc, MasterCard Inc and Discover.

Recent merchant acquirer agreements mean merchants, including fast-food giant Burger King, cosmetics retailer Sephora and gadget seller Brookstone, will accept PayPal in their stores by the end of this year.

Discover also works directly with about 1,500 of the largest retailers in the United States and it has been negotiating with them to accept PayPal in their stores.

Nordstrom Inc, a big department store operator, recently signed up for PayPal in-store payments through a direct relationship with Discover, according to Don Kingsborough, the executive overseeing PayPal's offline expansion.

However, Wal-Mart has so far resisted attempts by Discover and PayPal to get PayPal into its big-box stores.

"Walmart does not accept PayPal in-store," Wal-Mart spokesman Randy Hargrove wrote in an email to Reuters.

"The added complexity at the point of sale does not justify acceptance of PayPal," he said. Using PayPal often requires more than a basic card swipe. One way to pay is to input a mobile phone number and a four digit PIN.

Kingsborough said PayPal is focused on removing "friction" and added that the service helps merchants "engage with consumers in innovative ways on top of our core payments infrastructure."

During a mobile payments conference panel in San Francisco in November that included PayPal President David Marcus, an executive from Wal-Mart's e-commerce business, Gibu Thomas, said the retailer had to be careful not to inadvertently introduce another "middle man" into the payment process.