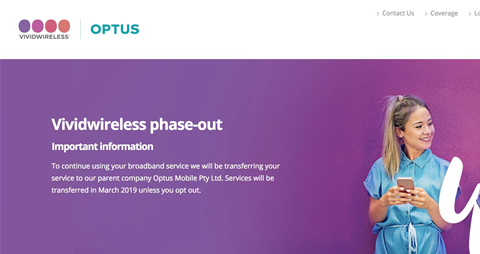 Optus is set to close Vividwireless, one of Australia’s earliest wireless internet operators, in April 2019.

The telco said on Vividwireless’s website that services would continue, but as an Optus-branded product.

“In recent years, this service has been delivered through the Optus 4G Plus network,” it said.

“From April 2019 all wireless home internet will continue to be provided on the Optus 4G Plus network by Optus under the Optus brand.”

Vividwireless was first announced back in 2009 as the retail front for a 4G network built by Unwired.

Unwired was later folded into Vividwireless, and the whole thing was sold by its then owner Seven Group to Optus in 2012 for $230 million.

Now Vividwireless will also fold; the timing of the fold also coincides with the expected launch of fixed wireless services by Optus on a precursor 5G network.